The night before, when I tried to access it, it would shut off as quickly as I turned it on. It was behaving badly. Facebook was wonky too. It would open, then close saying "Sorry, Facebook can't start," or some such message of hopelessness.

It was a nearly 4 year old Samsung Galaxy S6. I loved the phone, it rarely gave me problems and despite a battery that died halfway through the day, it worked pretty flawlessly. I had the oldest phone in my family, so was due for an upgrade anyway. 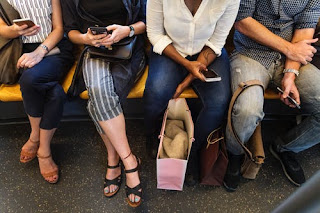 Now, understand that I have a love/hate relationship with these things, more hate than love, frankly. I think as a culture we've created devices of distraction and disconnection. There is a wonderful photo journalism article in The Sun magazine by Gianpaolo La Paglia that captures peoples' obsessions with their phones quite well. I feel that we've gone down a path we can't get back up, but I guess we'll just have to see where it takes us.

Anyway, knowing that my wife and kids are dependent on being able to get hold of me, I went to Best Buy to get a new phone. I am the world's biggest cheapskate so it took my phone being completely useless before I was willing to offer up $850.00 for a new one.

The buying process was about as painful as I feared. When I got there, they told me they were having a BOGO sale, buy one/get one free. This required a trip home to talk to my wife and son about what that meant to us. Ben needed a phone as well, and this looked like a good deal.

When I went back it was the usual hour and a half of typing my information into a slow application, calling ATT support and general jagging around. It is absolutely astounding to me how this process is not easier, but it never is. After that hour and a half of my life that I'll never get back, I walked out of the store with my new Galaxy S10e, and Ben's Galaxy S10 "on order" and due in at the end of the week.

So two days later, at work, I'm showing a co-worker a picture of something and I noticed my BRAND NEW screen was cracked. I had a case and screen protector on order, but hadn't received them yet. I was horrified.

After looking closer, I realized it was only scratched. It still made me sick to my stomach knowing I hadn't paid the $40 for an overpriced Best Buy screen protector at the store when I bought the thing.

I then spent the next six hours of my life in obsessive worry and dread about my stupid new phone. After reading online, I saw where sometimes applying a screen protector will cover up a scratch. That night I went to T-Mobile to get a screen protector. They said that they cost $44.00. I knew I had two that were on the way from Amazon for $13.00, so I said I'd wait.

I then told the clerk about my screen and mentioned how fragile these stupid new phones were. She took a look at it and asked if I had removed the protective film on the screen?

"Yeah, there's a protective film over the screen on the new Galaxys to protect them until you can get a screen protector."

This is the part where I am a man conflicted with both joy and embarrassment. Of course I hadn't removed the plastic film and the film was scratched, not the screen. The phone screen was fine.

I felt about as dumb as a person can be, but even more glaring was my awareness of how this worry had overtaken my life for six hours. What a stupid waste of energy. But, like everything else obsessive with these damn devices, it takes over your life, and I hate that about them.

To finish the sales story, I have been back to Best Buy twice in an attempt to pick up my son's S10, and we still don't have it. More life-sucking from the folks at ATT/Samsung.

I guess the moral of the story is we all have to take a step back and see where we are letting phones take us. This new phone has a "screen time" function, where it tells you how many times you've used it. When I checked, it said I'd had 46 unlocks.

That is sobering data I could only get from a phone.

My name is Jim, and I'm a phoneaholic.