Portaging Without A Canoe

April 04, 2019
About six months ago, I was invited to be one of the two featured poets at an event called Poetry in Portage (PIP). This is an event that takes place monthly and features two poets, each reading for 30 minutes, followed by an open mic where anyone can read some of their work.

Portage is a city about an hour and a half from Waukesha, just up the road from where I-94 splits with I-39. I saw this as a chance to increase my exposure a bit as well as take a little road trip. If you know me, you know I love road trips, so I told the organizer I would come up and present.

The reading was held at Suzy's Steak and Seafood restaurant. When I got there, I was greeted by the other presenter, Jane McCarty Osypowski and her husband. Later we were joined by a friend of Jane's as well as June Paul, the event coordinator. We had a pre-dinner drink and got to know each other a bit. Jane is also an artist, so admitted that most of her recent artistic endeavors have been with paint, not pen. 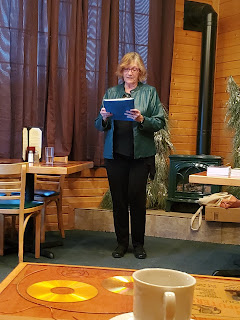 Now, I only have steak maybe twice a year, so I thought it would be a nice splurge. I ordered the New York Strip, and it was fabulous! If you're ever in the Portage area, check out Suzy's. A good old surf and turf restaurant.

When it came time to read, we moved to a private room. The crowd was small but appreciative. After a quick introduction and lead-off poem by June Paul, I started the evening off. I read a "greatest hits" list of poems from my four books. The more I do this kind of thing, the more comfortable I get. Near as I could tell, my work was well received.

After my reading, Jane took over and read her work, which was moving and well presented. I always admire these cross-disciplinary artistic types, because it is a skill I don't have. (i.e. my artwork sucks!) . When Jane was done, there was a short open mic where a few poems were read.

Ultimately, I ended up selling a few copies of Written Life, which is always a good thing for any poet. While it is great to have people appreciate your work, its even better if they buy a copy.

At the end of the night, June read an emotional poem about her brother that is dealing with a serious illness. I can certainly relate to the pain of watching a sibling going through difficult health issues. It was a point of connection for us that I hadn't expected when I decided to agree to the poetry event.

These poetry events are often times small affairs, but they are something I will continue to pursue. The new friends I made at this event made the trip worthwhile unto itself. But sharing my work with others and hearing their stories is ultimately the reason behind the whole deal. For a few hours I was thrust out of my geographic bubble into a new arena with strangers who three hours later became friends. It's probably an introvert's nightmare, but I've learned to embrace these opportunities and turn them into lifetime events that I can look back on with fondness.

Because these things make life a little richer.

June Paul said…
Your poetry was well received! I'm enjoying your book and we're so glad you wrote this blog! Come to Portage anytime!
April 5, 2019 at 10:38 AM