You Can See Kansas From Here

June 30, 2019
We had what some people might call a weather event here on Thursday.

It happened right after work and I was going to try and sneak a ride in before the rain came. I could see the skies were dark to the west, but that always happens. I really look forward to my rides, so was determined to get one in quick.

As I went west down College Avenue, the dark cloud covered the entire western horizon. It had a definite front line to it, so I thought I'd go to the edge of that front line and then turn around. 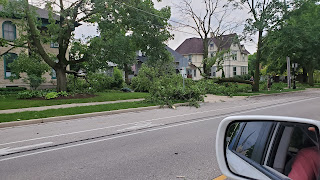 Well, every block I got closer to the death cloud the more I began to think I love my wife and kids and I should probably turn around. This cloud looked different. Menacing. So, I didn't even reach the bike trail and decided to double back.


I got my bike in the basement and within 10 minutes we had us a good old whippin' going. I've only seen wind come up that fast one other time. In 1998 we had straight-line winds blow through the city that had a similar intensity. That one was different in that it had a definite sound to it. The old saying "It sounded like a freight train," held true for that storm of '98. I see where everyone gets the correlation now.

This one didn't have a sound, but I was able to witness the whole thing. The storm of '98 was spent in the basement, because the sirens were going off. To watch the trees shake and bend and twitch like they did this year was pretty frightening. Wind speeds were estimated at 60 MPH. 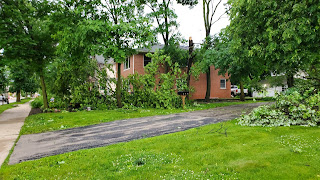 Then, when I noticed our planters were tipped over and running the risk of blowing away, I opened the door to grab them. The door ALMOST got ripped right off the hinges...along with my arm, I might add. I've never experienced wind that strong. When I asked Donna to help me, she couldn't because she was fighting to close the porch door to keep the dog (who was going ballistic) at bay. But because the open screen door was creating such a vacuum, she had to pull with all her might to get it closed. It literally took both hands and all my strength to close the door once the planters were in.

The two of us looked at each other and said, "What just happened?" After we'd secured everything we had a good laugh, but there was a moment there when I was channeling the Wizard and Dorothy. 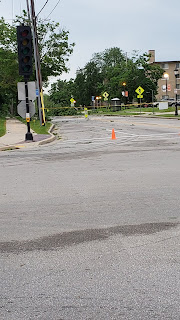 As it turns out our immediate area was among the hardest hit in this part of the state. Carroll University had a number of trees down and a few electric poles were bent to unsafe angles, to say the least.

It was all over in an hour or so, and the cleanup and post-mortem began in earnest. Carroll University had kids and staff out there picking up branches, rerouting traffic, etc. The city had work crews clearing trees and closing streets off immediately following. Police and fire were super responsive as well. It was a testament to the community's ability to work together.

Lucky for us, we only lost one major branch. Our neighbors weren't so lucky but it could have been worse.

The whole event was an unpleasant reminder of how loosely we should hold onto things.

Because at any given moment, the wind could blow it all away.