June 02, 2019
It has been a whirlwind week of travelling for me. After a two day conference in Eau Claire, Donna and I took a vacation in the Driftless Area of Southwest Wisconsin. For those unfamiliar, this is a hilly region of the state that was "missed" by the last glacial period. It is one of those areas I've only really visited once or twice, and then it was just to go camping at Wildcat Mountain and Canoeing down the Kickapoo River. 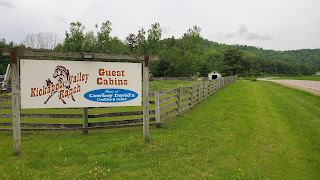 In a nutshell, the place is absolutely stunning. Hills, coulees and valleys are dotted with idyllic agricultural vistas, horse and cattle in pastureland and lots and lots of streams. There is a fairly high Amish population in the region and it was so cool to see them farming using a team of horses and a sit-plow/tiller. The area was green, and lush, and fertile. Frankly the whole place gave me a sense of hope and made me ashamed of the whole concept of mega farm agribusiness. I know these places are not the norm, nor could they feed large populations, but it sure seems like they're doing everything right. The cows looked happy.

The proprietor of the cabin we stayed in said there are over 250 miles of Class A streams in the driftless region. Now, I'm not a trout fisherman, but with all of the Class A Trout streams in the area, I had to give it a try.

So, I took my non-trout fishing ultralight rod and spinning reel out yesterday with the goal of catching a fish. One fish would have been one more than I expected. Trout are hard to catch, and stream fishing is difficult and tricky.

Well, I successfully landed 5 fish and lost a couple more. A couple of the ones I managed to bag would have made a good meal, but alas, I am a catch and release guy. If I knew more about how to prepare them, I'd have given it a go, but I had no bag, nor a stringer. As I said, I'm not a trout fisherman.

But the whole experience was so much fun. I think of trout fishing as a "thinking man's fishing." It takes a special breed to strap on waders an whip a fly rod hundreds of times to catch the elusive trout. But that same challenge makes catching one even more special. I did all of my fishing from shore, but I think I still would like to learn how to fly fish and see what the secret is. I've done most every other kind of freshwater fishing, so maybe it's time.

I do know that I've fallen in love with a new part of the state. The resort we stayed at was the Kickapoo Valley Ranch near La Farge, Wisconsin. The host Cowboy Joe was gracious and helpful. His partner Cowboy David, is a baker and makes phenomenal cookies, among other bakery. I can't say enough good about the place. 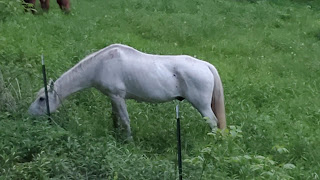 To top off the trip, we had dinner at the Driftless Cafe in Viroqua. I have one word of advice. GO! I had the beef tenderloin with potatoes, gravy and kale and it was off-the-hook! Certainly one of the top five meals I've ever had dining out. I enjoyed it with a traditional Wisconsin Old Fashioned that was dang good too.

All in all, it was a really cool couple of days. It is hard to put into words what the experience meant to me. Some quality quiet time with my favorite travelling partner, Donna. It's trips like these that rejuvenate a marriage - a reminder of why we chose each other.

They are also a reminder that it's good to be alive.

Jo Balistreri said…
Really liked your post. About two years ago, I took Frank up there—the very same place for 4 days. It was stunningly beautiful, quiet, and perfect. We even ate at the same place.

Unknown said…
And when all y'all can't get back here to The Kickapoo Valley Ranch Guest cabins quick enough, of course, Cowboy David's Bake Shoppe will ship you those amazing cookies (and a zillion other tasty treats) lickity split!!! ;)
June 12, 2019 at 10:47 AM