July 18, 2019
Tomorrow we celebrate the fiftieth anniversary of landing on the moon. It's hard to believe it was that long ago because that would make me old. There are a number of celebrations around Milwaukee and Waukesha as well as the rest of the country, I imagine.

For example, my wife's employer, Purple Door Ice Cream is selling their "Purple Moon," ice cream at UWM on Saturday for a Lunar Party. More locally at Retzer Nature Center, they are having a festival called Apollopalooza. These parties are justified in revisiting the incredible feat of actually landing a spacecraft on the moon.

I remember the night the moon walk took place. I was only 7 years old at the time. We had a black and white TV set and I can remember watching the lander sit on the surface for an hour, with nothing much happening except a lot of bleeping and some commentary from the news crew. As the wait for the astronauts to get out of the Lunar Module went later and later into the night, I grew antsy.

And the record gets fuzzy from there. I'm not sure, but I recall being told to go to bed, because no one knew how long or late it would be until they deboarded the module. The other possibility is that I just didn't have the patience to watch nothing happen for another hour or two. I'm not sure which story is correct, and while I didn't resent it too much at the time, looking back, I guess it would have been cool to say I saw it live, but I didn't. I guess the one thing I can say is I saw the LM sitting on the surface of the moon in all its black and white, (with static) glory. I remember the night, just like I remember the night MLK was assassinated. One doesn't forget events like that.

Space was all the rage back then. I remember my brother Tom buying and building an Apollo rocket that stood over a foot tall. The thing was amazing, but everything Tom managed to spend time on was amazing. I remember having an Apollo coloring book and seeing moon/Apollo stuff everywhere. It was a world changing event.

A number of years ago I went to Huntsville, Alabama to the NASA Museum down there. The software company we used was based in Huntsville and they threw a big party every year at the Space Center. It was fascinating walking through the exhibits and seeing just how small and tight everything was for those men. It gives a person a real feel for how miraculous the whole thing was, especially given the technology of the times. 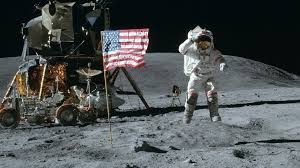 Of course I remember the Apollo 13 near-disaster as well. I remember hearing that these astronauts could end up orbiting in space forever. And I remember the relief the country had when they made it back down.

And I recall where I was for each of the space shuttle disasters. One was at my first apartment out of college, the other was at a men's conference for church. Both incredibly sad events in our space history. Unfortunately cutting the edge of our reach to the stars requires loss of lives.

So as we look toward Mars, maybe there will be a day my great grandchildren will be sent to bed before we walk out onto the Martian surface. I hope not, but if they are looking for people to head that direction in the next 10 years, I'm in line.