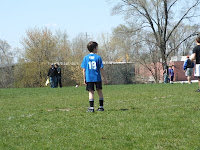 Waking up to a soggy overcast morning, after an allnight rain, I expected Ben's soccer game to be cancelled, to no avail. It turned out for the better as the Pirahnnas won 6-3 in a high scoring bonanza. Ben got an awesome assist as he shot from the left hand side of the goal. It turned out a bit short, but ended up right on the foot of his teammate Aaron who scored.

It was one of those situations where the actual assist was better than the goal itself. Ben's teammates seemed to congratulate him more than the guy who scored. There might be a bit of Father-bias in the whole thing, but hey, you have to give me that much. In any case, it is so good to see my son out there competing and contributing to his team's success. As an adult who loved sports as a kid, I hope he will continue his athletic pursuits the rest of his life. Being physically fit is so important to your quality of life. But I digress.


Off to the movies with the kids. Life is good.