May 14, 2015
It's just a little over 5 weeks before I return to the Boundary Waters Canoe Area with my kids, my brother and nieces and nephews. There will be seven of us going this year and for most of us, it will be our first trip back to the area since the trip in 2012. The kids are much bigger and more mature now, so it will be a different trip yet again. I was talking to a new friend about his trip to the BW a few years back and he experienced things I haven't yet, including a large buck deer, a nocturnal beaver and a knee high swamp portage. I told him every trip is different, different challenges, different joys, different wildlife.

All of this talk about the coming trip makes me nostalgic for everything that went into the making of Dirty Shirt. So, I thought I'd build some momentum and post a few pictures from past trips along with the story behind them. A sort of Dirty Shirt Addendum.

This comes from the trip to Iron Lake in the mid-seventies. The picture is a clear demonstration of what happens when a grown man sees a snake. My stepfather Jack and my two stepbrothers Patrick and Timmy are there with him and one of them saw a garter snake nearby. When Jack heard that, he freaked out and dove in - with great form I might add. Timmy was kind enough to throw the snake in after Jack. which added to the already chaotic scene in the water. Great juvenile fun in God's country. 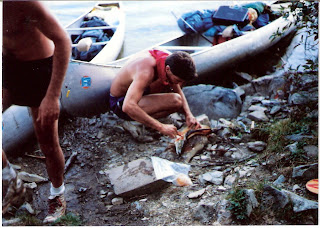 This was taken either just before or right after the infamous proper way to fillet a Northern dispute. (It's in the book). The exchange betwen Rob and Paul created a bit of awkward discomfort around camp for a bit. As I said, too many experts do not a fish fillet make. If any of us had known better we would have filleted it the way you should fillet a Northern. Get a good cutting board, then cut off the fish head. Next cut off the tail, then throw the whole thing in the trash and eat the board. Northern's not my favorite fish because it's nearly impossible to get all the Y bones out, which was Paul's corrective advice to Rob that spurred the whole dispute. Luckily they got over it and we had a nice, albeit bony fish dinner to celebrate. 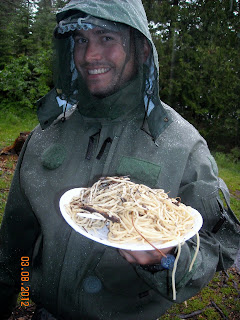 This was taken in 2012. After cooking in the rain for half an hour, we went to drain the spaghetti using just the pot lid. Well, things went awry and half of the spaghetti ended up on the ground. Nick was so hungry he offered to rinse it off. We assured him that we'd have enough, or that we'd just have a second piece of bread. That right there's a new dish called Spaghetti ala pine. 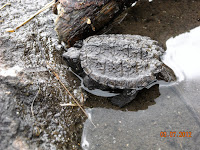 These two pictures summarize our run-ins with Snapping Turtles. The first was taken in 1989 when Keith landed a giant turtle on a sucker minnow. Since we'd left our turtle soup recipe back home we cut the line. (You can see its mouth at the end of the line.) The photo on the right was a baby snapper we came across in 2012. A much cuter amphibian than it's great grandfather from 25 years prior.

As I mentioned, every trip is different. I can't wait to see what 2015 brings. And neither can my kids.