June 28, 2015
Today marks forty eight years since my father's murder. I've never really been able to remember the exact date until the past year or two -- June 28, 1967. It's not a date I like to remember, so I always just kind of knew it was in June sometime.

Those of you who know me, know that I was only 5 years old when it happened, so remember little of my dad - a handful of memories, or cerebral snapshots of our times together. As the story goes, he was murdered in a seemingly random, racially motivated attack while minding his own business in Happy Harry's bar in a racially transitional part of town. I originally thought there were 4 men that beat him, but was corrected after my mother read a poem I'd written about that night. She said it was a band of 11 people. I guess the numbers don't matter, what matters is that he was outnumbered and singled out because of his skin color. They beat him, left the bar and returned and beat him again, fracturing his skull.

As much as I have never wanted this event to define me, it certainly played a significant role in my upbringing, and ultimately my personality and character development. While I may have harbored some hatred and fear as a kid, I am long past that. In fact it's my feeling that the only way we will ever get along despite our cultural differences is to integrate, listen and love those that are different than us. This goes for people of all races, cultures, and orientations. As tragic as my story is, there are tons of people with worse stories and, for the most part, I came out unscathed. Luckily we had a mother who made a commitment to raise us right and loved us enough for two people.

None of this is to discredit the role that my stepfather, Jack, played in my formative years. Time with him and his natural family were some of the best times as a kid growing up. But deep down we knew he wasn't our "real dad" - a stigma every step-parent has to battle with, I suppose.

So what ultimately came out of my dad's early death when I became a dad myself? Well, I remember thinking the thing I wanted to do most was just BE THERE. Be there for my kids when they learned to walk and talk, be there for their first day of school, be there to teach them how to fish, and be there for them emotionally and physically. And while I always tend to look back at some things I could have done better, I think I can safely say I did the best I could at the time. There's no "Owners Manual" for parents, and so we winged it and crossed our fingers. Read to them, feed them, hug them daily and tell them you love them until you're sure they know. Those things are all they really need anyway.

Oh, and probably a diaper change somewhere in there.

From what my mom has told me, our dad loved his family more than anything. I have no doubt that he would have been there for all of us as we grew. I always kind of wonder what really happened that night in June, but as I said in Dirty Shirt, I guess that will have to wait for that one day when we're reunited around the campfire in heaven. 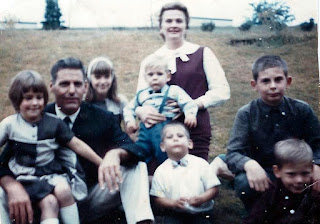 In closing, I have to say that in light of what has been happening of late with the #blacklivesmatter, alleged police profiling, the Charleston shootings, the Confederate flag issue and even some of the hate directed at the gay marriage decision, it seems that we still have a whole long way to go in this country. And each of us as citizens can choose to be either part of the solution or part of the problem. After forty eight years, I'm trying my best to be part of the solution.