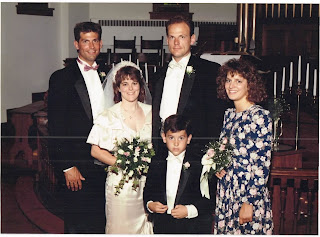 In my previous post I mentioned that my wife and I are approaching our 25th wedding anniversary (Tuesday, June 16). I'm pretty sure being married that long puts me in the old guy category, but our love for each other is young. For being two very different people with regards to lifestyle, we're also very compatible. The theory that opposites attract is maybe true in our case.

It was a hot, ninety-plus degree muggy day, for our wedding. Our family rented rooms at the now-defunct Kellogg's Inn, a small hotel out behind the restaurant by the same name. It worked out really well, as we were all in one spot and were able to communicate details, etc. That morning we had breakfast at the restaurant and shortly after that started getting ready for the wedding.

Gorham, New York, where Donna was born and raised is a small town. A gas station, small grocery, diner, small library and a few other miscellaneous businesses. We were married in the Gorham United Methodist Church. It was small but beautifully quaint - like something out of an old movie. 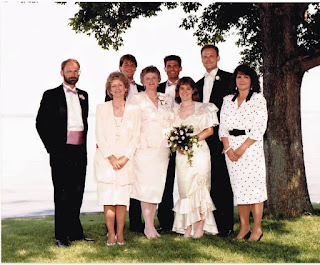 My family, the groomsmen and I got to the church an hour and a half early. There was much activity, moments of great confusion (quickly resolved) and eventually we all found our places.

Our pastor was Carlos Smith and his wife Pat was the vocalist. They both were amazing. Carlos told a story during the "homily" or whatever the Methodist equivalent is, that told of a man and wife who were married for 50 years. Every time they had dinner, the man gave his wife the heel of the bread. Feeling offended on the eve of their 50th wedding anniversary, she finally spoke up. "I've been meaning to ask you why every time we have bread you give me the heel?"

The husband said, "Because it's my favorite part." 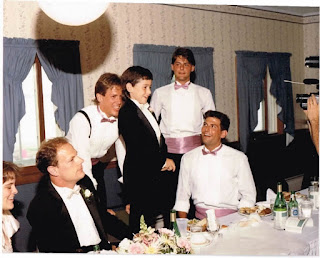 It was a great story with the perfect message for any newly married couple. Sacrifice is so important to a good marriage. There's not much room in a good one for selfishness.

Pat closed out the service with a beautiful song and we formed the worlds longest reception line - or so it felt. I met a ton of people who I didn't know, but had a great time nonetheless.

Donna and I, Rob and Jill - the best man and maid of honor - climbed into Donna's uncles Lincoln Continental and after a stop at Donna's house for a bottle of champagne, we headed to the Geneva Rod and Gun Club (also now defunct) for the reception.

There was a sit-down dinner, followed by a DJ and lots of dancing. The place is right on one of the finger lakes and was a magical place for a reception. All of my brothers and the maid of honor all gave spoken toasts to our marriage. The place was teeming with love and support. That love sustains our marriage even today, of that I am convinced.

The capper to the best day of my life was when it came time to leave, we boarded a yacht that some friends of Donna's parents had arranged to take us across the lake to our car. It was such an incredibly cool way to leave a party. We felt like royalty.

At one point as we were cruising along the lake, I took out a dollar bill and threw it to the wind. Donna looked at me and said "What are you doing?"

I said, "I've always wanted to do that."

It is a ritual I try and catch her with every year on our anniversary when we go out to dinner, usually tossing one out the window of the car. Makes me feel rich. Ha!

If people are wondering what our secret is to staying together for 25 years, I would have to say three things are key:

1. Sacrifice. Do nice things for each other. Compliment each others' strengths. Realize that they're doing their best at this thing as well. 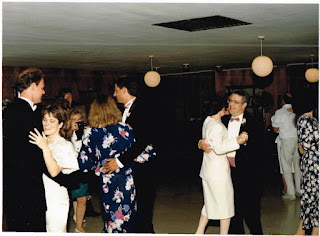 2. Laugh together daily. We crack each other up every day. It relieves stress and keeps things light. It is much of what drew me to her. Our senses of humor align quite well.

3. Share your faith. Our marriage was built in a church and despite a slow start, we hooked up with a church in the early 90's and our spiritual growth alongside each other has been the glue that holds us together in many respects. It pulls us through the hard times and makes the good times that much better.

So, that's it. Twenty Five Years! The next 25 will probably go even faster, but like these, I plan to take them one day at a time.