Brothers, Sons, Daughters, Uncles and Cousins - Then and Now

In a bit of a prologue to the story below, I was vetting my kids' clothing before they were packed for the BWCA trip. I had specific instructions that they were to wear long sleeves for the way into the portage, as the bugs were bad. Ben hadn't packed one and couldn't find a decent one in his closet, so he reached into his laundry pile and pulled out a flannel shirt. He smelled the armpits, and threw it into the bag I was packing. I thought, "Well, it's always good to start a trip with a dirty shirt."

I done raised him right.

This past weekend saw the return of our group to the Boundary Waters Canoe Area, (BWCA). There were seven of us, my brother Tom and I, his son Hunter (17), my kids Sarah and Benjamin (19 and 16) and my nieces Alison (18) and Amanda (14). The only difference from the 2012 trip was Amanda took my nephew Nick's place. It was her first trip to the BWCA and we were anxious to see how she'd fare. It also meant Hunter and Ben would have to portage and share a canoe all weekend, the source of my own anxiety when I thought about it too hard.

Our entry point starts with a long, rocky uphill climb. I had a pack that felt about ten pounds heavier than I would have liked, considering I had a 56 lb. canoe on my shoulders as well.

The portage was spirit sucking.

I met up with my daughter who was taking a break about a third of the way in. My brother happened along and the three of us all did a pack shuffle to get the group back to Zen. Eventually, after a few visions of Mother Theresa and a couple of walking black-outs, we all made it to the end. I look at this portage as our own little personal marathon every time we walk it. It builds character and gives one a great sense of accomplishment.

Once we arrived, we set up camp and ate a quick lunch of sandwiches we'd packed. Everyone was anxious to get out fishing, so we made quick work of it. While Tom and I set up camp, Hunter and Ben went across the channel to get firewood. They found a dead birch and brought back a boatload of wood. All weekend I was amazed at how far the kids had come since our last venture in 2012.

We set out fishing before dinner and despite a slow evening, we landed a handful of Walleye and a couple of Rock Bass. Alison stole the show on our boat, landing four fish on the day. Ben and Hunter roamed looking for Northern Pike and Hunter managed to get a fish or two. 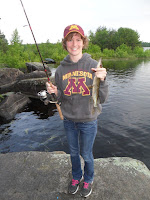 Once back at the site, I sensed Sarah's angst at not getting a fish. She set to work right away, fishing from the cliff our site was perched on, five feet above the waters edge. Within an hour she had a small Northern Pike on the line. She beamed for a picture and rested easy knowing that the first one was out of the way. Sometimes that's the hardest part.

That night we had a great meal of Tom's Jambalaya and sat around the fire mourning the fact that we forgot the Smores ingredients. Every trip has something that goes missing, and this time it was the Smores. We lived through it. It was a great night finishing out a satisfying first day.

Saturday morning Tom and I got up early and started breakfast. It was a beautiful morning filled with the sounds of red squirrels, woodpeckers and the wind in the trees. An hour later the rain came. It rained from 8 AM to  4 PM. The teenagers slept until about 11:00 and then gathered under the tarp and ate chocolate chip pancakes. When the rain stopped periodically they'd run out and cast a few lines. It was during this time that Alison managed to haul in a nice 28" Northern Pike, the biggest fish of her life. Because she was on "the cliff," I scrambled down the rock wall and grabbed the big Pike so she wouldn't lose it. 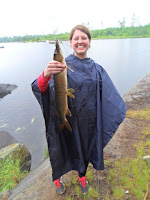 When I measured it, she was happy to hear it was an inch longer than her biggest. It made me think of Rob and how proud he would be of this moment. Here she was with two of his siblings and all of her closest cousins in one of his favorite places on earth. Three years earlier we sprinkled his ashes on this very lake and we couldn't help but feel his spirit right there with us. It was a moment that made all of the planning, and stress and pain and bad weather worth it for me. I was a proud dad by proxy.

The weather cleared around 4:00 and we headed out fishing again. This time the girls all asked if they could share a canoe. Tom and I agreed it would be okay. The water was calm and letting cousins build a little self confidence and have a blast in the process seemed like the most prudent thing to do.

And all I can say is that listening to the girls laughing and talking in muffled conversation across the bay from us warmed my heart. Again, how lucky are we that we have raised girls that love the outdoors and are becoming adept fisher-women, campers and canoeists? It was such a cool night. Furthermore, Ben managed to hook into a 24" Northern that night that was his personal best as well. When I heard he'd got one, I was ecstatic. He was the only one who'd not had a fish yet, so this completed the group. 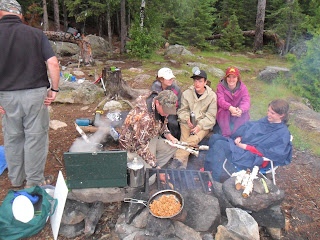 Tom and I managed to land a few Walleye ourselves. It was great spending time in the canoe with him and was likely reminiscent of my dad and his twin brother Tom doing the same thing over fifty years ago.

(Oddly enough every night we hooked them to the stringer a big Pike, or snapping turtle would eat them off overnight. At one point I picked the stringer up and just a fish head was left! Yikes!)

That night we had a fantastic dinner of spaghetti followed by a night around the fire. It was this time around the fire listening to Hunter and his cousin's banter that made me pause and appreciate how lucky we are as parents to have such good kids. The fact that they can sit on a log, drink water filtered directly from the lake and tough out inconveniences like pit toilets and all day rainfalls makes me think that I want these guys on my team during the Zombie apocalypse.

We got up early on Sunday which was Father's Day. It was foggy and we pushed off into the white wall and felt our way back to the portage. Frankly, I can't think of a better way to have spent Father's day than with family in a place that meant so much to my Dad, uncles and brother. The fog was a mystifying and surreal ending to a great weekend. 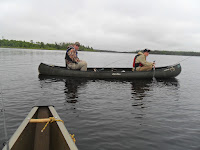 Great kids, wicked senses of humor and tough as nails. There was not a cell phone or screen in sight for two days and they lived to tell about it. They made some incredible memories, moments I'll never forget. I don't know when we'll get back, but until I do, I've got a feeling it's only going to get better.