February 12, 2017
In my ongoing edits for my next book, I am increasingly called upon to recall events that happened forty years ago, or more in some cases. Looking back on my childhood, I forgot to carry a notepad around and write down every major event or milestone as they happened. Because of this, I am left to recall all everything by memory alone. It worked this way with the writing of Dirty Shirt as well. It was during that process that I discovered that sometimes we remember things wildly different than how they happened.

For instance, I point to the story where, after tipping our canoe, we were left to try and find a campsite near our entry point. I originally had written that we camped on an undesignated campsite on a nearby island after paddling out of the stream system we were in. When I passed the story to my brothers to fact check, they both reminded me that we indeed did not camp at the island. They both agreed that we had tried to camp on the island but it was already occupied on its a designated site, so we were forced to camp on the mainland at an undesignated site.

So much the truth, the whole truth and nothing but the truth.

Of course, when they reminded me of it, I remembered that they were exactly right. Over time though, my memory had made up, or maybe pieced together, its own version of the story. The principles of the story were right, namely:

But somewhere along the line I made up the part about the island and convinced myself that it was where we stayed.

Just the other day I had a guy from work who had just read Dirty Shirt ask me if I had journalled durign those trips, or did I write strictly from memory. I told him it was all from memory and that even today I don't really journal on trips. My first purpose on any trip is to enjoy the moment, and I don't want to ruin that by having to take notes.

However, I do think that I have a knack for remembering occasions and details maybe better than some people, which may be why I'm good at creative nonfiction. I think part of being an introspective person means I don't always say a lot, but am always taking it all in - sometimes down to the minutiae, like what song was playing or what a person was wearing. Being able to recall that and put it to words is what makes writing fun for me. 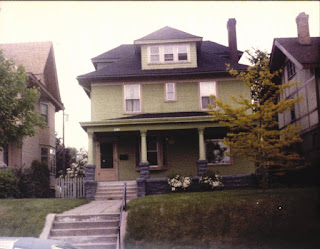 With my current work in progress, just yesterday I was writing about how our house was burglarized three times in the early 80's. I had my own vivid recollection of each incident - or at least what items were taken. Because I wanted to be sure my facts were straight, I asked my mom and sisters what their recollection was. Of course it was different than mine, and because it had a more direct impact on my mom, I tend to believe her over my own story. We both had all the same items accounted for, it was just the order of which burglary involved which items. that was different.

(Yeah, I guess after looking back, we lived in a tough neighborhood. LOL)

Writing memoir is a constant reminder that our memories fail. As we deal with my mother in-law's dementia, I fear that such a devastating disease like dementia or Alzheimer's may some day strike me and take away my ability to keep doing what I love doing - namely writing about the past. At the same time, I always hear that things like reading and writing are the exact things we need to keep doing in order to stay sharp and in part to combat Alzheimer's.

And so, as long as I can, I aim to keep doing it. Remind me that I said that next time you see me.