Maps And The People Who Love Them

February 26, 2017
I have been in mapping and Geographic Information Systems (GIS) for 32 years. For the past 20 of those years, I have been involved in a statewide organization known as the Wisconsin Land Information Association (WLIA). In layman's terms this is a statewide group of people who are employed in some sector of the geospatial industry.

These are map geeks.

These are computer geeks.

These are my people.

As part of this organization's mission, they host an annual conference every year at a different location around the state of Wisconsin. This year was at Chula Vista Resort in the Wisconsin Dells. These conferences are the usual fare of educational workshops, user presentations, special interest groups, networking and social activities.

The past year I have been part of the Board of Directors for WLIA which is charged with a number of duties including putting together this conference. While I have been a member of the group for 20 years, I've learned more in the past year about all that goes into a conference. Here is a little of what we see and do at the conference.

Maps
Every good GIS conference has a map gallery and WLIA is no different. Our conference actually hosts a map and poster contest where they have several categories of maps, small format, black and white, aerial and more. This year one entry was even an edible map - a frosted brownie with a map of land cover on it!

Good Friends/Networking
Over 300 people attend this conference every year, and while I claim to be an introvert, nothing brings out the closet extrovert in me like getting together with old friends to talk shop, sometimes until the wee hours of the morning. My boss' wife came to one of these conferences one year and, when she was done with a late evening of socializing with the GIS crowd, she said to him, "Do you 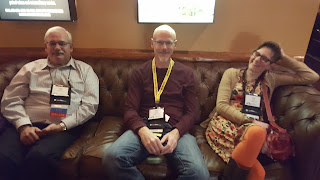 guys ever stop talking shop? Does anyone ever talk about their family?" And while she was being sarcastic, she wasn't too far off the mark. Sure we talk about family - a little - we are really here to solve problems, share successes and troubleshoot issues. There is a a level of passion in GIS that I am sure is present in other trades/industries, but we take it to the next level.

Cool Gadgets
Because we deal with technology and trying to make flat maps fit in a round world, we get to play
with some of the coolest gadgets and technology out there. (Well, it's cool to us, anyway.) Things like GPS receivers, Drones, and 3D printer/plotters. This year we had a 30 year celebration which we chose to use to display some of out "historic tools and maps" on a table in the exhibit hall. One of the cooler things I saw was a Stereo Aerial Pair viewer. You put two overlapping photos together under these and you get the illusion of 3D. The other was a Leroy lettering set that was used to add lettering to maps so it looked uniform, All of it's great stuff and we need to see these items of the past to see how far we've come.

Every year we hold a silent auction to benefit students pursuing degrees in GIS. This requires a fair amount of grovelling and pandering to get donations - much of which is my task as coordinator. This year we raised over $3500 on the auction and between that and the raffles we hold, we raised enough for four $1000.00 scholarships. Having two kids in college (soon enough) I know the importance of every dollar in scholarships.

On top of all of this, there were lots of people behind the scenes who, although they look calm on the exterior, are barely holding it together. They are the ones running between session rooms, their vehicles and the registration desk making sure their tasks are done. Without them, there is no conference. With them, the attendees have a better experience.

Furthermore there is one woman who makes sure that everything runs smoothly and while she doesn't do it all, she is the go-to for so much of it. I have nothing but admiration for her calm demeanor and her authoritarian approach to things. When she gets on the phone to the hotel staff, SHIT HAPPENS. (Pardon my profanity.) I think every conference has one, but we have the best.

So as I spend the next couple of days recovering from "social overload," I want to remember how much I do enjoy and learn at these events. It's all good stuff, even for a closet extrovert.

Nancy von Meyer said…
30 years of friendships. How cool is that. And I share your respect and appreciation for Ann Barrett. Good summary Jim
February 26, 2017 at 4:53 PM