February 09, 2017
My next book is centered around the house I grew up in in the 70's in St. Paul, Minnesota. Of course the bulk of the story is built on what life was like growing up with five siblings in a single parent home. As I've written the stories and presented them at writing workshop, people have assured me that the stories are applicable to anyone who's grown up with multiple siblings, a single parent family or both. There are enough humorous stories mixed in with moments of near-tragedy to keep the reader interested - at least I feel there are. My classmates reaffirm these hunches.

Tonight we had dinner with some friends who we've come to know who are pretty cool. We were introduced by another friend and have sort of latched onto them, in part because of their story, but mostly because they are fun to be around.

I mention this in relation to my book because, as I was telling Donna, the energy of their household reminded me of my own home growing up. They have eight children right now. Two are biological, one is adopted and five are fosters. Oh, and they have two dogs. So on every given day the energy level is significantly higher than around our own almost empty nest.

Their kids are respectful and well behaved, but like when I was growing up, there is sort of an ever constant rattle and hum to the house. It is one I last experienced as a young father on those nights Donna was at her Pampered Chef parties, selling cookware. Those nights where I was not only responsible for getting dinner on the table, but also for post dinner PJ's and entertainment and bedtime stories. These paled in comparison to growing up when there were enough moods, attitudes and hormones circulating around the house that it was spectator sport to just sit around and watch ourselves get on each others' nerves. 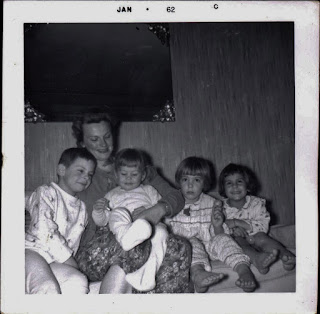 There's a part of me that misses the loving chaos of a big family and these nights with our friends reminds me of how difficult it can sometimes be one minute, and how joyful and beautiful it can be the next. At one point, after dinner one of the children came up and just said "I love you, momma." A touching moment as the days energy level wound down.

While I'm not sure I could go back to having that many little bodies around, I have nothing but admiration and respect for these friends that have chosen to take these kids in, love them completely and raise them as their own. I'm sure their story is one of many like it, but I'm glad to be a small part of sharing in their lives, albeit sporadically at dinners when invited or in social situations when they manage to get a rare night out.

Because as cliche as it might be, sometimes it takes a village. And if we can be there to love their kids and share some laughs with the adults, well, that's a pretty cool village.