Another One In The Books

March 11, 2018
Last night was my Saint Paul bookstore debut at Subtext Books in downtown. I have been trying to get a St. Paul reading/signing gig for quite some time and was finally able to get into Subtext. The city of Saint Paul is the setting for the book, so it was a sort of homecoming for both of us.

When I arrived, I thought I had everything under control, but as the place slowly filled up, my nerves ratcheted up a bit. As much as I do this whole public appearance gig, I still get jittery from time to time and this was no different. I thought I'd be better in the company of family and friends, but it may have made it even a little more nerve wracking. 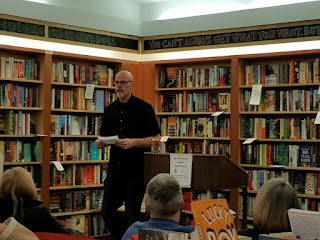 I started with an introduction which fed right into the readings. I typically do three readings per appearance. The three stories give the readers a feel for the book. In this case, I did two humorous stories and one more serious heartfelt one. The first was a little rough, but I managed to power through it and the other two and came away feeling pretty good.

Overall, the audience seemed genuinely engaged and laughter was sprinkled throughout.

But the best part of the evening was seeing so many family and friends show their support. The place was packed! There was standing room only at the back and I would guess there were 40-50 people in attendance. The crowd managed to buy ALL the books that the bookseller had purchased ahead of time, so I sent my wife and sister in law to the car (thank you both!) to get more from my own personal stash. They sold an additional 11 of those. It was a lifesaver. There's nothing worse than going to a book signing and not getting a book, right? They did an amazing job at the whole event and I am eternally grateful to Sarah Cassavant and Sue Zumberge of Subtext for hosting me. We need to support these small businesses! 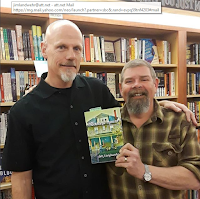 Among the guests were two guys I went to grade school with that I had not seen since. I have been Facebook friends with them for some time, but when I saw them, I had to hug them. When people go out of their way to show their support for you, you reciprocate. It was positively humbling for me.

Then, a group of five women that I used to hang around with in college surprised me by showing up. Again, I hadn't seen any of them since my wedding, and it was SO GOOD to see them. We didn't get much time to catch up with each other, but they all looked fantastic and despite the passing of nearly 28 years since we saw one another, it was like picking up where we left off. I thoroughly believe that good friends are a gift from God and I was so glad to see them all again.

Jen, the sister of my good friend Pete from high school and college, also showed up with her husband, which was sweet.

Add to this my entire family, a cousin, and a friend and his whole family from my time at Montgomery Wards, and it was just overwhelming.

But what it boils down to is my network of family and friends in both places makes them equally home. And when I mentioned that I'd like to have coffee with each person in the audience and talk about their life, I was serious. My writing has opened my eyes to the fact that everyone has a story. The fact that they can sometimes relate to MY stories only makes me want to hear theirs.

The evening ended with a social event at the Spot Bar a mile away from the reading. Again, quality time laughing and telling stories with family and friends.

The entire night filled my heart to full. I am surrounded by beauty and love and support and am immensely privileged to be able to do something I love and share it with others. It feeds me and is the impetus for doing more and more of it.