Stepping Off The Board

March 15, 2018
This past Friday marked the end of my two year term on the Wisconsin Land Information Association's board of directors. WLIA is a statewide organization that works to advance Land Records modernization and distribution. Basically it's about 850 geospatial and GIS geeks.

The association organizes three gatherings a year, one annual conference and two regional meetings. In past years I always attended the annual conference but rarely made the regionals. I was a member of WLIA for 20 years before I finally ran for a position the board. It always seemed like a daunting commitment and one that I was hesitant to take on.

Now, having served on it for two years, I can only say it was an incredibly rewarding experience. I wish I had gotten involved earlier. Oh sure, I did some peripheral things, sitting on a committee here and there, but it was only when I got on the board that I was able to meet some peers that I would maybe have never gotten to know. I'm not one to go outside my circles to meet people, but when you are put in a position where you have to work alongside them, it changes everything. 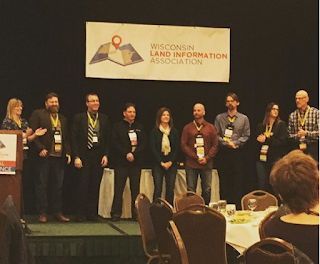 And while Robert's Rules and long, drawn out board meetings are great, (sarcasm) I've discovered getting to know my peers was the best part of serving on the board. The people I met including:

Because things were changing so dramatically at work, I couldn't commit to another 2 years on the board, so I stepped down after one term. I may run again someday.

I guess my point is that my regret with getting involved with WLIA is much like my delay in getting my writing career going. I wish I'd done both sooner.

If you're on the bubble for something you don't feel comfortable I would urge you to:

Not wait for "someday."

You won't regret it.

Unknown said…
I will always sit close to you! Great friendships and opportunity. As long as I am making people uncomfortable I am doing something right.
March 15, 2018 at 6:15 PM