May 03, 2018
I've been thinking a lot about artistic expression lately. Not personally, although my writing is certainly an extension of my own expression, but more along the lines of seeing it in others and recognizing it for the beauty it is.

This past weekend for example I went to the Jazz Estate in Milwaukee to see a band named Devil Met Contention. They were preceded by a band named Pay the Devil. (I see a theme here.) 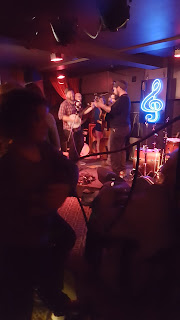 Both bands were really good. The folk band that played first took turns with solos from the mandolin to the guy playing the washboard to the guitarist. I love watching live music. But what occurred to me was how everyone in the audience was enjoying themselves in THAT moment. As anywhere a  few clueless folks were obsessed with their phone, but for the most part, people were giving their full attention to the music of the moment. That is what musical art is; notes played into space in this case only to fade out. Its a temporary state of joy.

The same goes for visual art. If you're at an art museum, you're taking in the creative beauty of someone you don't know and it somehow changes you. You walk to the next piece, and you are changed again - in small, maybe insignificant ways, but changed.

And it occurred to me how the appreciation of these arts is such a core human need or pursuit. It separates us from the animals, except those crazy painting elephants. We desire it. We need it. And yet it is always one of the first things cut out of a school budget, a family's expenses, or any other discretionary purchases.

Art gets no respect.

Then, on Monday I was in writing class and a woman who is 70+ years old read from her children's book she is writing. It is a story about a singing flea and it is nothing short of creative genius. And again I was amazed that there were so many other things this woman could be doing after 70, and here she is creating something beautiful, hopefully to one day be enjoyed by children.

It truly is art in another form, knowing no boundaries of age or gender. And the 10 of us crowded around the table were there to appreciate it of our own accord. Meanwhile it changed us in small ways - perhaps giving us ideas or simply a smile and an appreciation for the moment.

Tonight I will attend a play featuring my brother in-law as the lead. I am certain it will be yet another example of being there, in the moment, pummeling the right side of my brain.

Because art takes many forms, and I am of the age where all of it requires my recognition/appreciation.