A Portal To The Past

June 17, 2018
It is a warm August evening in 1989 and my girlfriend and I are sitting at the bar of Wolski's Tavern on the lower East side of Milwaukee. We are awaiting our friend, Bill, for a couple of drinks and maybe a game of darts, the real steel-tipped kind with chalkboard scoring. The music system, complete with octagonal shaped speakers that hang from the ceiling, belts out hits of the day by REM, New Order and The Cure. Flags of foreign countries and other places cover the ceiling in parachute fashion and the cash register is the old fashioned kind whose keys requires a two handed forceful push, followed by the drawer opening and a ca-ching. Everything about the place has an old Milwaukee feel to it and it is a recent favorite haunt of mine since I moved to the East Side.

I am drinking a Point Beer because it's cheap and a nice change from Miller products. Donna is on her second or third Gin and Tonic and is getting that dreamy look in her eyes. She has a bit of a grin on her face as she gazes at me. We're in love and infatuated with each other, something the gin is amplifying, apparently.

Wondering what her grin is for, I ask, What are you thinking?"

"I don't know. I just love you and want to marry you and have babies with you." She replied.

Sitting there a bit shocked having been taken off-guard, I laugh a little and say, "Are you proposing to me at Wolski's Tavern?" 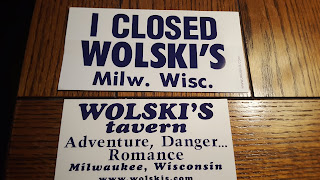 "Okay," I said, not sure what she would remember.

My friend never shows up and after another half hour we head back to our cute little apartment on Lake Drive.

The next day as we were driving to St. Paul, Minnesota to visit my family, I asked her if she remembered what she asked me.

It is June 15th, 2018 and the temperature is beginning to heat up on the edge of an approaching hot spell. My wife and I are sitting at a table at Wolskis Tavern in celebration of our 28 year anniversary. The music is a mix of '80s favorites including the Replacements, The Cure and New Order. In fact, other than a new floor and the absence of a cloud of cigarette smoke, the place is nearly as we left it. Same speaker system, same pictures on the wall, same flags on the ceiling.

I am drinking a Lakefront beer made a mile away, and Donna is drinking a Guinness, what she calls her "safe beer," mild, smooth and coherent. We await our longtime friends who represent the longest friendship we have with anyone in Milwaukee. Eventually they show. We have a ton of laughs and do a bit of reminiscing about our past and our hope for the future.

In every sense of the word, Wolski's is like a portal or time machine for us. It's unassuming interior doesn't allow for people to put on airs. It's a working class bar, but all are welcome. It is part of our story and in a world of constant, fast paced change, it is timeless. 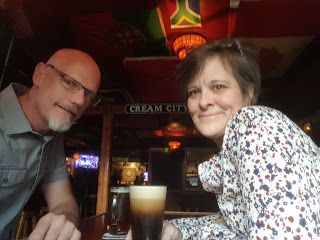 We met the owner as he came to the table to see how we were doing. I told him our story and he said he was probably there that day. Of course he was. His presence completes the picture beautifully. I asked him if we could get a couple of their world famous, "I Closed Wolski's bumper stickers and he kindly obliged. One of them was an old favorite and it reads, "Wolski's Tavern: Adventure, Danger...Romance."

I, for one, can attest to the romance part.