The Portland House Pays Itself A Visit

June 14, 2018
So a while back, I sent a copy of The Portland House: a '70's memoir to THE Portland House. It was a suggestion by my sister, Jane. She thought it would be a cool idea to surprise the owners and let them know that their house was famous in a sub-atomic micro fame sort of way. 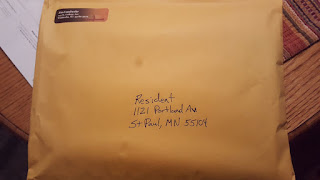 I sent them the book with a short note basically telling them that it was the house I grew up in  and I thought they might enjoy reading some of its history. I also told them that if they felt compelled, they could leave it for the next owners or even share it around the neighborhood. I sort of hoped for a response, just to see what they thought.

Well, today a card came from The Portland House family.

The card was written by the wife of the current owner - the same owner who bought it from us over 32 years ago. She said that they did a big renovation five years ago, including a new garage from what I can see. They also removed the open porch and put on an enclosed one. She said they had 3 boys and that the grandchildren love coming over. 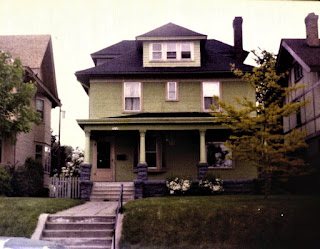 The card closed with an offer to show me the house any time I was in town. She also gave me her email address. I will definitely follow up with her and possibly take her up on her offer.

As I've said during some of my readings, our houses represent a vicious cycle of move-in, live, move-out, repeat. And within the structure we create the memories, we take those memories with us along with the couch and kitchen table.

The Portland House was where us kids became who we were to become, if that makes sense. It formed the framework for our identities that we carried into our own homes as adults.

And looking at the love, success and joy in the lives of each of my siblings, Mom and that old house did our family pretty good.

Blogging off...
book the portland house