A Nod To Those Before Us

June 03, 2018
I spent Thursday at a GIS conference in Delavan, Wisconsin. One of the speakers had a fascinating presentation about the prehistoric Native American burial mounds that dot the state and the region. His description of the purpose, makeup and art involved with these sacred places was captivating.

He mentioned that over 200 of them had been excavated and destroyed by people looking to study and/or loot them of grave goods - which they tended not to have. The vast majority of them contained human remains of one person, usually a person of nobility among the tribe.

The thing about his talk was that after it, we were able to go outside onto the Lake Lawn Conference Center grounds and see a few of the mounds. They were simple in shape, one oval, another shaped like a reptile or turtle.

The speaker spoke with reverence and respect about all of the mounds he detailed. He made it abundantly clear that the way they were disregarded and disrespected in the years after white contact was nothing short of a travesty. He reminded us that the very place we were congregating was occupied by people thousands of years before us.


He even talked about "Man Mound" near Baraboo that is in the shape of a man. It is right outside his house and he has taken to painting the legs of the Man that were destroyed when they put a road right through them. He said there was a Native American woman in the community who will no longer drive the road that cut through them, out of respect for her ancestors. I think that is so awesome. 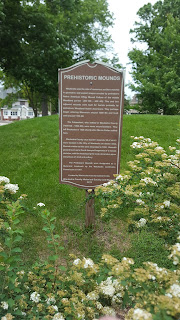 We have our own set of mounds in Waukesha, a couple of which are just up the street from where I live, on the campus of Carroll University. There are others outside the library. The whole talk spurred me to revisit these and read the plaques that had been placed there. I've included a few in this post to give you a sense of the magnitude of them. I also removed a discarded water bottle someone had left on the big one at the library. People are so irreverent. It bothered me. I have nothing but shame about the injustices done to the Native Americans in the past. The least we could do is respect what they left behind.

I studied archeology in my college years, so this kind of thing fascinates me for some reason. I get fairly obsessed thinking about people of the past, hence my memoir writing passion, I guess. At the same time, I think we need to understand the past to understand our place in the present day too.

In any case, I can't stop thinking about these now. It will fade, but every time I see one, it will make me think of those who went before.*

*On a writing-related note, my poem, First, will be published in the WI Fellowship of Poets 2019 Calendar. It is a poem about these very mounds and how we are immigrant visitors to this place. They were here first.

Jo Balistreri said…
Thanks for writing about this, Jim.

There’s so much pain when I think of what we have done to the Native Americans. It’s so present and shameful.