August 04, 2019
After a day like yesterday in our country, it's a little hard to put together an upbeat, funny or positive blog. Nothing is funny in light of what appears to be a systemic problem with guns and racial divisiveness in this country. And while I place much of the blame on the fear-rhetoric of our current administration and the spinelessness of our congressional leaders to face up to it and do something about it - everything from gun control to condemnation of the Twitterer in chief fanning the flames with his thumbs on his phone - the spineless swamp is wide and deep in Washington.

Sorry, it's been a tough go for me lately.

The worst part of it is the sense of powerlessness and the resulting despair that comes with it. It seems all I can do is wield the power of the pen. So, I'll keep it short and leave this post with a couple of poems I wrote on the subject of guns a while back during, oh, I dunno, the 39th mass shooting of 2019, or so. We're up to 249 in August for those keeping score. And I can't help but ask God's mercy on this country. I'm not so sure He's all about blessing America right now.

Each kid had a name
and a story to tell
now stories untold
because these bullets
lead to nothing
but screams of grief
an ocean of sorrow.

Bullets 1-3 hit Matt
who would have been
a programmer
while 4-6 hit the whiteboard
and 7-12 took
out Kristi, a future
mother
-a great one at that-
if not for those six bullets.

13-23 were used
to terminate forever the
friendship of Charles, Justin
and Miguel who
were talking about
the coming weekend
just a minute earlier.
a weekend that would pass
without them.

Rounds 24 through 27
were errant shots of mercy
splintering the desktops
of higher learning
once graced by those
of generations where
assault rifles were
weapons of war
not a means for
violent revenge.

Bullets 34-86
took from this earth
eleven other
bright lights

These children
were taken
from us
by an assaulting
weapon of war
good for
one thing.

When geometry takes a backseat
to active shooting drills
and lockdown exercises
We could have us a gun problem.

Or, when the student body
means one lying in the classroom
instead of the corporate whole.
We may have a gun problem.

Maybe when the suggested solution
to stopping the next school assassin
is to arm the English teacher.
We might just have us a gun problem.

If people speak about knives and bricks
as potential weapons of mass murder
“So are we going to ban those too?”
We certainly appear to have a gun problem.

When students become survivors
and stand up to NRA politicians
but still laws don’t change.
It’s safe to say we have a gun problem. 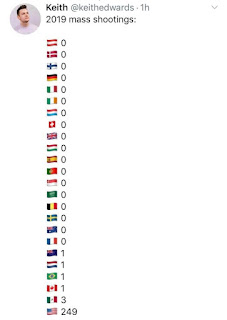