August 18, 2019
Just back from another week at Pine Forest Lodge with family. This trip saw the four of us plus Sam, my daughter's boyfriend, and Van a friend of my son's.

We've been going up to this cabin on and off since about 2003 or so. Lots of great memories over the years, fish, fun and family.

This one came on the day after my son's 21st birthday, so we celebrated with a birthday apple pie, a gift opening and a few drinks because, well, 21! 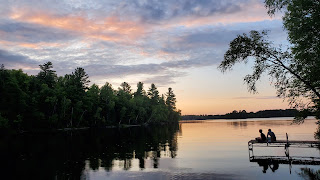 The week was full of lots of reading too. Four of us had books we were well into throughout the week. My wife actually finished more than one. It is refreshing to have so much downtime that you can read without guilt or interruption. It is a habit that I am happy our kids have adopted. Even Sam commented how much he'd enjoyed reading a book instead of peoples' crap on Facebook.

What struck me most about the trip was the continuous outdoor quiet. There's something healing about the wide open spaces and the way it seems to muffle the few sounds there are. It is also comforting to be away from the noise of traffic that is so much a part of our life in the city. I don't know of a way to fix that short of moving up north or out in the country, but it sure was nice.

The fishing was about what we expected. Spider lake is tough to fish and never fails to disappoint. The good news was everyone got something, albeit sometimes tiny.

The highlight of the fishing was on Thursday night at dusk. The bugs had just started to come out, so I was beginning to think about going in to shore. As I was tending to something else, suddenly my fishing rod jerked. I thought we were snagged, and when I grabbed the rod, I realized it was a fish. A big one. The scramble for the net was hampered by the fact that it was under the leech bucket, a beer can and a tackle box. The whole thing was a comedy of errors actually. 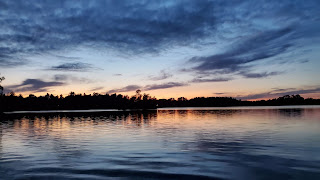 When I got it to the side of the boat, I realized it was a big Walleye and determined I could get it in without a net. At 23", it turned out to be the biggest fish I'd ever pulled out of Spider Lake. I've caught larger ones in Canada but my son and his friend were stupefied by the size of it. The biggest Walleye they'd ever seen. It capped off a relaxing week rather nicely.

All in all, it was good to be around our kids for a week. The best times were dinner meals together. Lots of goofiness and laughter. It's weird to relate to our kids as adults, but we have a ton of fun laughing with them over food. 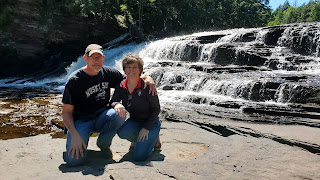 The highlight of the outdoors element was our hike along the Presque Isle River in the Porcupine Mountains wilderness. Trees over 400 years old, waterfalls, lots of cool rock formations and plants and flowers. It makes a person feel really small.

So tomorrow is re-entry into reality. It's good to be refreshed though and being out in our natural world was a good part of helping it happen.