August 15, 2019
This weekend marks the 50th anniversary of Woodstock, "three days of peace and music." Much like the Green Bay Packers Ice Bowl, I would love to say I was there, but I wasn't. At 7 1/2 years old, I couldn't find a ride. Even my older brother was only 14 at the time, so none of us was of the age to go. 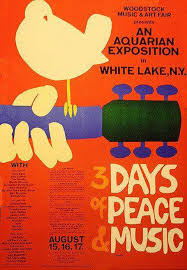 If you know me though, you know I am a music lover. I tend to romanticize big events like Woodstock and its California equivalent Altamont. From what I've seen of the history of the event, it was a poorly organized, understaffed and underprepared event, set in the middle of a rainstorm. There have been some good articles about it recently, as well as a PBS special that was well done. Both talk about how it was about more than the music. It was a community of sorts. More importantly, though, it was a statement about a generation. Hedonism? Probably. Hippies, for sure. But a gathering in the name of peace, by any standards, is something worth striving for.

So, feeling that I was denied the chance to participate in a little bit of history, I had to try and think of my own version of Woodstock. There were a few close candidates:

1. The Grateful Dead at Alpine Valley in 1987. The parking lot was a "community" of its own. The concert itself had a tinge of Woodstockness to it with the trippin' naked guy running through the lawn seats. I'm glad I went with my friend Allison, because there's nothing quite like the Dead at Alpine.

2. George Thorogood, Robert Cray and Short Stuff at Trout Air in 1984. Rock n Blues in the open air with throngs of people. 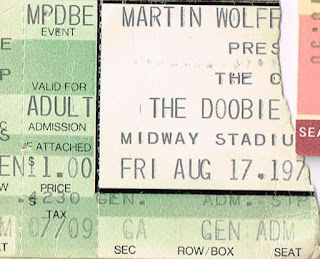 But if I had to call one my own personal Woodstock, it would be this concert at Midway Stadium on August 17th, 1979. Part of what makes it significant is that it was exactly 10 years after Woodstock (and incidentally, 40 years ago this weekend!)  This was a mega-venue, totally outdoors and was a little poorly planned itself. For starters it was General Admission, except for the field seats which required a special ticket (if I remember correctly.) I vividly recall there were not enough bathrooms and featured, like most rock concerts of the day, a few ladies crashing the men's bathroom because they were sick of waiting in the women's line which was typically 3X longer than the men's line.

In a look at how concert tickets have skyrocketed, the whole event cost $11.00!

I was an absolute maniacal Cars fan at the time. Even though the Doobies were headliners, for me, it was all about the Cars. Besides, at this point I considered the "Michael McDonald Doobies" a bit of a sellout. I loved their old stuff, (China Grove, Jesus is Just Alright, Black Water, etc.) but the "smooth jazz" sound of McDonald was not for me. But, I was willing to put up with it to hear my favorite band.

It was a pretty great concert. The cars played about 15 songs after a warm-up set by a relatively new, obscure group named Night. It was the first of 5 total times for me to see the Cars over the next 8 years or so. They actually put on a dull stage show, don't really play to the crowd, but I loved their music enough that it didn't matter.

The Doobies followed up with a decent show of their own. I vaguely remember fireworks shooting out of stacks during China Grove, near the end. And as a nod to Woodstock, I also remember it beginning to sprinkle near the end of their show.

So instead of three days of peace and music, I had to settle for 5 hours of people, traffic and music. Instead of brown acid, we altered our minds with overpriced monster cups of budweiser. Thank goodness for small blessings that way.

I realize even the suggestion  that this is anything close to Woodstock is musical heresy, but I am nothing if not a sap for nostalgia. That night was far from anything historic, but memorable to me as a teenager trying to rebel and rock out for a bit. And at the time that's all that mattered. In that way it was really groovy.

The Cars
The Doobie Brothers