February 09, 2020
I'm taking a new approach on my blog posts for the next while. As a creative exercise, I've decided to write about a picture. I'm calling it the blog series, Picture My Life. I will try and write how this photo, this moment captured in some cases decades ago, has made me who I am, or changed how I look at life.

I keep all my pictures on my laptop ordered by year. And because I have a zillion photos on my laptop, I decided to walk my way through with a method to my madness for determining which one is chosen.

To choose it I will take the date of the post and use it as my criteria for which picture is chosen. For example, I'll use the month as what drives the subfolder I choose, so February would be the second folder. Then, I'll choose the picture from that folder as the day of the post, so the 9th would be the 9th photo in that folder.

So, starting with my first folder, the year is 1987, and the photo is me and my godson Nicolas, goofing around with a Jack in the Box at Christmas. 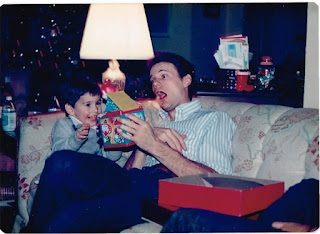 This picture was taken by my mom. It was around Christmas time, if not on Christmas Eve and I think it almost speaks more for itself than I can put into words.

Nick and I have always had a good relationship. As his godfather, he was favored over some of the other nieces and nephews, but I have always loved all of them. They were my "kids before I had kids."

At times he had anxiety issues to the point where he'd work himself up to an upset stomach. I remember one time at Como Zoo, when I was with him and my niece, Erin, Nick told me he wasn't feeling good. Knowing his history I hustled him over to a garbage can, picked him up and held him there waiting for him to puke into it. He must have had stage fright, because it never happened.

It was one of those uncle/nephew bonding moments, you could say. Ha!

But, as I said the good times we've shared over the years have far outnumbered any bad. There was the time I took him kite flying on a hillside in Maplewood. I just remember him running with the kite in jeans and some new cowboy boots, which he'd taken a recent liking to. Simpler times, but for some reason the memory has stuck.

We've had many other great moments together, including paddling and camping in the BWCA and sharing a cigar in Cozumel where he married his beautiful bride, Janet.

But probably the one story my wife remembers about Nick was the first time she met Nick. She and I were engaged at the time and went to Nick's house for a visit. When his mom told him that this was Donna, who was going to be his aunt, he stormed away and said, "She's not going to by my aunt!"

It seems Nick and I were so close, he didn't want to share me. Ha!

Needless to say, he got over it the same day and realized she wasn't so bad. The ironic thing is, about 6 years later, we chose him as our daughter's godfather.

So the relationship came full circle.

In any case, Nick grew into a fine man and now has a son of his own. He's an airman in the Air Force and just returned from a tour of duty in the Middle East. And I hope there may come a day when he's sitting with his own son, scaring the hell out of him with a Jack in the Box. (One of those toys I sorta love/hate.)