February 23, 2020
I spent late last week in Middleton at the Wisconsin Land Information Association's Annual Conference. This is a statewide gathering of Geo/Map Geeks that features keynote speakers, GIS presentations, workshops and networking.

For a number of reasons, both organizational and personal, this year's conference was one of the best yet.

For starters, one of the Keynote speakers was Jack Dangermond, president of the Environmental Systems Research Institute, better known as ESRI. While this doesn't mean much to the average person, he is sort of a hero in GIS circles. He pioneered GIS back in the '80s and went on to startup the most successful GIS software company in the world. 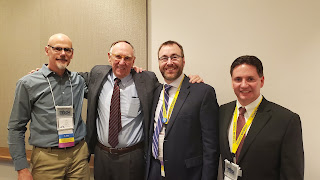 Jack was gracious enough to attend and present a keynote address. I was fortunate to be granted a short conversation with him and a couple of my peers while he signed a few books. The four of us talked about the esri User Conference, esri products and a little about what we were working on at the statewide level. For a man of his notoriety, he was gracious, humble and down to earth. A pleasure to chat with. The books he signed were used for the silent auction and 50/50 raffle and, in some cases, sold for more than the cover value.

I was in charge of the silent auction and 50/50 raffle again this year and due to the generosity of the donors and bidders, we raised over $6,000 toward scholarships for college students pursuing degrees in GIS and Geospatial Studies. It was a conference record from that standpoint.

Because I was busy chasing around for the auction/raffle most of the time, I really didn't get to many sessions. But those really are the heart and soul of the conference. A ton of content and some fantastic sessions (I'm told), including a couple by colleagues from my office.

The map contest was a fun event as well. This year it featured the judges doing an exercise where twe had 5 minutes to draw a map of Wisconsin on a small sheet of paper - essentially the size of a cocktail napkin. It was a test of ad-hoc artistry among a bunch of people who were in charge of judging the maps immediately following.

The map contest ended well for myself as my maps took second place in the "most unique map" category. My entries were a Map/Art collaboration with artist Sara Risley who took a 3D surface model of Landfills and Lakes in Waukesha County and added her artistic touch to them. There were a ton of other amazing maps in the contest as well. Colter Sikora does a fantastic job with the event year after year.

One of the highlights from a supervisory standpoint was watching my colleague Chris Dickerson receive an Emerging Leader Award on stage near the end of the conference. This is a new award category that seeks to recognize GIS professionals that are making an impact in the first 7 years of their career. I am incredibly fortunate to work with three very talented GIS professionals in my office and so it was nice to see this kind of recognition. Another one of them is a board member charged with organizing much of the conference. Waukesha County is nothing if not engaged within WLIA. 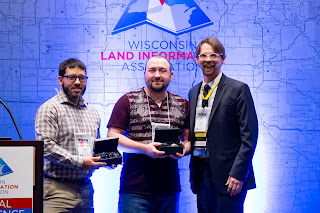 My only regret about the conference was not getting to talk to a number of peers that I'd hoped to talk to over the course of the event. I tend to turn on my inner-extrovert at these conferences and can't get enough of people. Time never allows me to talk to those I want to, and if it does, it's never for long enough. So, if I missed you or was in the middle of rushing to one thing or another, I apologize. Let's get a beer or coffee soon!

The biggest surprise of the whole conference though, was an appearance by a small contingent of the UW band. They marched in during the Thursday social event and played a few songs in the exhibit hall. It was a treat and meant even more to me being my son is a junior at UW Madison.

Overall it was an amazing conference from both a personal and professional perspective. I often say I love my job and this conference was a reminder of how lucky I am to be surrounded by such a
supportive group of people and peers. I'm just grateful to be a little part of it.