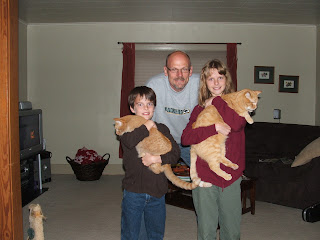 The kids have been enjoying the "Spanish for Dummies" DVD's that have been in our car since Donna started her Spanish crash course a few weeks ago. Of course the word the memorized first was Bano which means bathroom. Some things are so predicatable.

I got a call from Donna at about 5:30 CDT and she said all was well. All she said was Guatemala was "very different" from the US and/or what she expected. She said it was going to be a very interesting week. That was about all the report I got. We continue to keep her in our prayers here and look forward to the next report.

Sarah and I had a great night last night. We took Toby to the dog exercise park in Brookfield and he did OK. Being the smallest dog there doesn't help, as he tends to garner most of the attention from larger dogs not to mention the occasional raptor passing overhead. (Tastes like chicken!)We ate out at Oscars and watched Ghostbusters later that evening. Couple that with the frozen pizza we had as a family for lunch and you get a good feel for where our diets are headed for the week. Ever see the movie "Super-size Me"? If I were in charge of cooking all the time, we'd all be 300 lb diabetics within a year. At lunch I forced the kids to drink a 100% juice juice box to stave off the scurvy for the time being.

We all made it to Church this morning. Parents were invited to worship with the kids in the Amphiteater. Of course there was lots of dancing/signing moments and if you know me and my expressiveness, you know how well I participated in that. It's the stoic German-Swede in me I guess. This carried through as I went into the main sanctuary and saw how subdued the adults were in their worship relative to the energy of the kids. I'm as guilty as the rest.

The message in church was from Luke and covered the crucifixion and the incredible contrast between the two thieves hanging next to Jesus; One bitter, cynical and sarcastic, and one remorseful and humbled by the presence and righteousness of Christ.

Toby managed to chew a nice hole in the carpet when left unattended while I was in the shower this morning. In a glass-half-full moment, I rationalized that this was why we opted to wait on getting new carpet at least until he's past the cursed chewing stage. This rationale doesn't make me less upset, it's just my was of trying to decellerate the road to insanity. "Hey, it's not such a bad hole...look, we can put a chair over it." AAARRRGGGHHH!

It has rained ALL DAY and is showing no sign of slowing down. Gloomy!

Watched the Packers game between taking Toby out to pee, feeding the kids lunch and bending at the waist to pick up socks and Tobies latest chew toy. They managed to win 17-14. Coupled with a Bear loss to the Vikes, it was a good day.

Tonight is Dad's first night of dinner and I think the menu goes like this. We'll start with a Chicken dish made of ground white meat coated in bread crumbs and shaped like a small hockey puck. For a side dish, we'll have an apple slices cut into fine wedges and perhaps garnished with sugar and cinnamon. And for a bevarage we'll top it off with a couple ounces of Skim. 20 minutes later we'll finish off the evening with 2 scoops of Mint Chip ice cream with chocolate sauce and whatever sprinkles of Moms that we can get to.
Tonight we'll settle in and watch Firehouse Dog on DVD. Tomorrow starts the real test with getting them up and off to school. It'll be fine. Normal, no...Fine, yes.
Loooking forward to tomorrow!
God Bless.
Jim