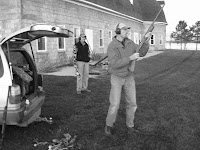 I was never much into the hunting thing. Oh, I tried it a handful of times, even had my own shotgun for a number of years. It just never did anything for me. After a total investment of probably $300.oo in guns and shells, my net take was a single pheasant and a grouse. Even the grouse was "disputed" with my buddy who claims it was his shot. (It probably was. I think I let him have it anyway.)

I bring this up because this weekend is the weekend of the annual Landwehr Hunt. This is a longstanding tradition in my family that goes back to the days of my father, one of the original instagators of the event.

It began as "the brothers" hunt back in the 60's sometime on the farm property of a good friend of my dad and his brothers. Typically there were no guns brought to the hunt and it consisted mainly of playing cards and raising cain.

I only made it up to the hunt once, back when it was held in Dent, MN. It was a crazy weekend, but the highlight had to be listening to Uncles Tom, Willie and Jim tell stories about my dad. At this point, the oral tradition is all we have left to go on and these were the guys that lived closest to him. Heard some great stories of him and some of the other brothers. (There were 7 brothers and a sister in dad's family)

The other good memory was getting to know Coe and Don a lot better. These were cousins who I never really knew as a kid, so it was cool to meet them and get to know more about them and their stories.

One of the stranger events up there was called "shotgun bowling". It entailed lining up ten bowling pins about 30 yards away and taking aim with a shotgun. The pickup truck was nearby, blaring Johnny Cash of course, making it a scene right out of Smokey and the Bandit. When things got dull with the shotgun, Coe pulled out his .44 magnum (yes like the Dirty Harry gun) and they took to using that. It was a gun I had to try once, and all I can say is, it was scary powerful. I wouldn't want to be on the receiving end of it.

So they're all up there for the weekend. I would be too, if I hadn't had gone musky fishing last weekend in northern WI. A man only has so much time and money, you know?

Within a one hour span today I went from remorseful, to feeling incredibly blessed when I passed a low-income area of our neighborhood, to extrememly nostalgic about my college past when a song came on my ipod. It is amazing how our brain works to bring those feelings to the surface based on what we see, hear and feel.

I submitted a blog post to http://www.redroom.com/ for a blog contest on the theme "The time I won". I gave them a story about my 8th grade football season. We'll see what comes of it. It is very nice now because I am starting to build up a collection of writings that allows me to pull stuff out when those kinds of things come out and present them. Allwriters has been good for me in that respect.

Well, speaking of which, I'd better get to a bit of editing, before it gets too late.