Turkeys, Harleys and a Pinata Flogging 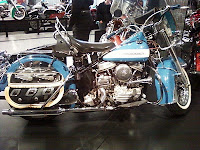 We just finished our 2010 version of Thanksmas around here. In case you don't know what that word means, it's our family's combining of Thanksgiving and Christmas. We celebrate it every two years on the "off years" when we spend real Christmas in MN.

Typically, this festivus-style event involves either meeting at a central place (e.g. the Sandusky, OH Kalahari water park) or a home in Waukesha or New York, depending on the year. This year brought the NY clan out west and we did Thanksgiving on Thursday, and Christmas on Friday.

Thanksgiving was a great time with the cousins playing together and working on various art projects together. They get along so well, at least for a couple days, after that all bets are off. As they get bigger, they've become much easier to manage and allows adults time to be together and catch up on things. We had an amazing dinner, followed by a rousing round of the Game of Things. The family got to meet Jake, Mark's partner and he was warmly received. He's got a wicked sense of humor and fit in with the whole family right away. (The kids barraged him with a nerf gun assault as proof, on Wed. when he least expected it.)

Friday John, Jill, and I went to the Harley Davidson Museum. John bought a HD this past year, so wanted to check it out. It's a great facility and very well laid out. There is even a section at the end where people are allowed to sit on a variety of different bikes. I was skeptical going in, but it proved me wrong. The only downer of the whole thing was the highly overpriced gift shop at the end. I guess being part of the HD machine comes at a price.

I said to John and Jill that bringing me there was a mistake. While I appreciated all the bikes there, it only made me want one worse than ever. I am many years away (if ever) from getting one, and if I did, it would be a used one. If that unexpected windfall of money would come from my long lost Aunt Irma in International Falls, MN though, it would be the first thing I bought. Alas...

After the HD museum, we met the rest of the family at Mark and Jake's new apartment in Bay View. There we had a nice Mexican dinner, followed by a pinata beating in the basement. This probably is the strangest Christmas ritual we have ever created, but hey, like I say we had fun with it. The pinata was dressed and quartered and all of it's spoils were split among the children. We followed that up with a gift opening. From there we went to our friends Jill and Steve down the street for drinks and laughter. Good friends, food and family.

Otherwise, it was a good vacation. Of course there was the usual family dynamics and dysfunction that we ALL go through during the holidays, but nothing more than we've seen in years past. We all just kind of roll with each others' neuroses and everyone has a good time. I think a festivus pole, complete with an airing of the grievances, would be a nice addition to the whole affair.

Thank goodness we have two days to recover and recapitulate. We're both kind of exhausted, if not from the work of it all, from the socializing. Tomorrow is a true day of rest, and I plan to use it as such.