Black, Blue and White All Over 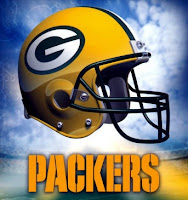 So the NFC Championship is going to be Packers/Bears. What a great rivalry and a great match up. I think it will be a good game, but am really hoping for a Packer blowout like they had on Saturday versus Atlanta. Wow, what a fun time we had watching that game. We went over to some friends' house and had a little playoff party that was a blast. It's always more fun watching those games with someone else. Family is fine during the regular season, but those playoff games deserve better.
I don't want to get too jazzed up about it until it is certain that we've won and are going to the super bowl. That would be so cool and as I said in my prior post, if we can knock off Atlanta, we can beat anyone, including the big, bad Jets and Steelers. This game in some ways is always a bit more of a nail biter than the actual super bowl. If you don't get into the big show, nobody remembers who lost the NFC Championship in {fill in the blank year}. You've got to at least MAKE it to the super bowl to get the respect due.
My brother started Chemotherapy treatment today and has been on my mind all day. It's a 3 day treatment plan, followed by 3 weeks of recovery and then 3 more days of chemo. My prayer for him is that this is the beginning of some great healing. He goes on to clinical trials after this, depending on what sort of progress they're seeing. As I said before, I hope someone wakes me soon from what has been a very long, bad dream. Chemo-healing would be a great step in that direction.
Waukesha got 6 inches of snow today. Got to fire up the ariens and have my fun. I really don't understand why I waited so long to get a snow blower, for crying out loud. It's the best $225 I ever spent, that's for sure.
Tomorrow night is Elmbrook Mosaic, Middle School Ministry, Wednesday night is AllWriters Workshop and Workplace and Thursday is the All Canada Show. Shaping up to be a busy week, per usual.
I do LOVE the All Canada show though. It is hard to explain, but it gets me "up to Canada" in a way, in the middle of January. Just walking around the booths and looking at fish pictures, crunching numbers with the vendors and having a few laughs with the fellas is a great escape for me. I usually go with Steve and Dave. Despite knowing that we're going to return to the usual place, we still go just to check things out. This year we're actually talking about changing locations, so will have a renewed interest in the offerings.
I hope you all had a chance to reflect on the great things that Martin Luther King Jr. did for the country and the world on this national holiday. He was a great man of peace and civil rights.
Blogging off...
all canada chemo NFC Chamionship