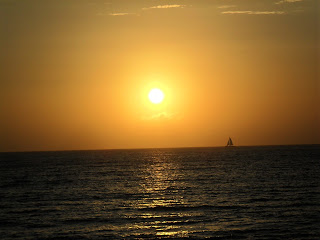 I am slightly more than 25 hours back from Cozumel, Mexico. I was there to celebrate my nephew (and godson) Nick's wedding. There were a number of amazing and awesome moments with my family, both immediate and extended. I'll summarize our experience along with some editorial comments about my first Mexican cultural experience.

Our flight down was good. After our initial disrobing and full body scan, pat-down and humiliation, it came off without a hitch. We did end up sprinting through the Houston airport to make our connection and were literally 4 of the last 6 to get on the plane. If we had missed it, we would have missed a whole day of the trip.

The customs experience in Cozumel was not too bad, although a bit chaotic and slow. The airline had run out of forms for entry, so in customs, virtually everyone on the whole flight was looking for a pen.

The cab ride to the hotel was an education in aggressive driving, near misses, and lawless driving. That is really the only word I can think of for the traffic and transportation system of the island; lawlessness. Vehicular road-worthiness is lax. Traffic laws are written, yet rarely heeded or enforced. There are no passenger limits for any size vehicle. Animal passengers on mopeds, scooters, motorcycles and bikes are frequent and typically quite skilled. (My sister said she saw a small dog standing on all fours on the back of a moving scooter.) Center lines are strictly decorative. Traffic signs are just to allay the tourists. Shoulders are for passing. No parking zones are simply suggestions. Truck beds qualify as back seats for as many as will fit. Rear view mirrors are strictly optional, and, if you happen to have side mirrors, not required at all. Seat belts are for the weak or uninformed. And finally, lights, wipers, and signals need only work for one side of the vehicle. In essence, the only rule of the road is: The bigger vehicle wins.

It is completely random, totally intense, and, at times, shockingly stressful.

And I loved everything about it.

I felt at home. (A few people might say I drive aggressively, but I think I'm fine.) I think we can learn something from it. We are the most over regulated, overprotective country on the planet. We could use a few less rules, signs and policing around here.

The hotel was really good. All accommodations were taken care of, with the exception of slow moving toilets and safes that could not be opened, once locked.

The wedding was positively perfect. It was held near the beach at Mr. Sancho's a few miles outside of town. It was like a fairy tale, including the handsome groom and beautiful fair bride. The Hawaiian version of "Somewhere over the Rainbow" was played as the wedding party walked in and it just got better from there. The minister was succinct, but every word had spiritual and emotional meaning.

Another thing that struck all of us when we were there was the way time slowed down. I had more people come up to me and say they always thought it was 2 hours later than it actually was. I can't explain why that is, but I think it had something to do with people not checking their phone, their email, or their facebook status every half hour. It was a refreshing pace of life, and again, I think we could all learn something from it.

The Mexican people are beautiful. They were courteous, friendly, accommodating and hard working. Some of the towns we went through on our way around the island were fairly poor. Many of them had little, and yet seemed happier than many Americans. We need to learn from them that as long as we have our family, our faith and a job, we are truly rich.

There is just too much to cover in a single post, so I"ll save the rest for later in the week. Suffice it to say that I was nothing but impressed with Mexico, it's culture, and it's people. My family is pretty amazing too.