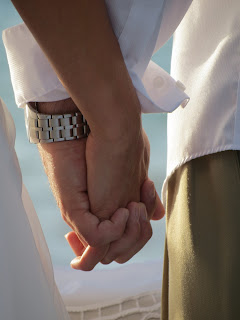 There were many other eventful happenings on our Mexican vacation/wedding. As with any foreign vacation, the language barrier can come into play at anytime. Throw a thick Spanish accent together with my early-onset, concert-induced hearing loss and there are many chances for a miscommunication during almost every exchange.

For instance at one point I was in line for tacos and the server asked me a if I wanted shredded or ground beef. I think he asked in English, but can't be sure because I couldn't hear it. Anyhow I said, that I'd take one of each. Well, I got two ground beef. Rather than argue, it was just easier to eat what I was given.

Another incident happened when our toilet backed up in our hotel room. When I called the front desk, the man who picked up gave an extended greeting is Spanish, none of which I understood. I said that I had a problem with our toilet and gave him our room number, 2417. He replied that he would send a man right up.

Forty minutes later, no man. So I asked Sarah and Ben how to say "My toilet is bad" along with my room number in Spanish. Then, I wrote it out on a piece of paper. This time when I called, I got the same greeting in Spanish, and, thinking I would make the problem clear, I said "El bano es malo.  veinticuatro diecesiete." After I said it I realized I forgot to say "Hola". This is because I was reading from the script.

Anyways, the gentleman on the other end said in reply, "Oh, your toilet is bad? I'll send a man right up." He did and the problem was cleared up. My kids could not stop laughing at my attempt to speak the language and the fact that I forgot to say hello. Oh well.

As I said, the island is beautiful, especially on the gulf side. The touristy side we stayed on was much more built up and congested. Much of our view from the hotel was obscured by hundred foot tall cruise ships. The whole trip made me quite sure I'll never take a Caribbean cruise. Not my thing, for sure, though some people love it.

The trip was most memorable for time spent with family and friends. I feel like I really got to know my niece Jennifer much better. She is funny and beautiful and it was really good to be around her. I also got the chance to salsa dance with her sister Stephanie at a nighttime concert thing in the teatro' band shell. We had a blast trying out our moves, none of which were in sync at any one time. I'm sure it was a sight from the outside in. When we were done dancing, I said to my wife that I've never really salsa danced before, to which she replied, "Well honey, you still haven't." Evidently I wasn't convincing. :-)

There was quality time with my brother Tom, whose sense of humor is as close to mine as anyone I know. There were endless laughs with my sister Jane as well as some touching moments at the wedding. There were some hilarious moments with my mom who, at one point, was on the back of a motor scooter waiting for Jen to take her around the island. This is a woman who is 79 and she's doing things many 59 year-olds would not do. She is amazing. There were funny moments with my sister in-law, like the time she said something about a pastry and I thought she said "peach treat". (That hearing thing again.)

And of course there were countless memories from the new people I met. Janet's family is fun. Her mom and Dad are great to talk to and I got to know her brother Dan a little at the wedding and around the complex.

Best of all, it took me back to my own destination wedding 22+ years ago. It was a different kind of destination, one not as nice, but to me the day was just as beautiful in every way. Small church, small town, lots of loved ones who traveled far to support me, a large body of water, and a happy occasion with the woman of my life.

What more can a man ask?

Congratulations Nick and Janet! Welcome to the family Jim, Denise, Dan and Julie.