A Reading from the Book of Sarah 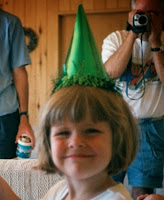 Tomorrow my eldest, fairest, and only daughter turns 18. As my boss put it so disturbingly, she could technically get married now and not have to ask permission. Yikes! Thanks for that shot to the cranium. I'm well aware there are a host of other things she'll be eligible for too, including tattoos, credit lines, and probably some once-illicit-now-legal activities in Colorado and Washington. She's a smart kid though and we raised her right, so I trust she'll make only good decisions, like waiting until you're 51 to get a tattoo, if ever.

Sarah began to make her entrance into the world in the middle of the night in November of 1995. Donna woke me up at 3:00 AM saying something like "I think this is it!" I jumped out of bed and we both clicked into hyper drive. We let her brother know (he was living with us at the time), called the doctor and hit the road for West Allis Memorial Hospital. After almost 8 hours of labor, she was born at 10:53 AM that day. She was beautiful, the experience was humbling and it was one of the three most amazing days of my life, the other two being Ben's birth and my wedding day.

When Sarah was born, Donna's friend Jacqui gave the us a blank journal book as a gift. I started journalling key events and, being a writerly-type, have faithfully journaled through both of my kids' lives. It's nothing special, simply a page or a paragraph entered for life events, special days, holidays, or, just because.

I did it in part because I love to write, but another reason was I wanted them to have something to remember me by in case something tragic should happen. Having lost my dad when I was just 5 years old, other than pictures, I really have nothing to remember him by. I'm not dissing him or anyone else for not writing about their experience (God knows he had enough on his plate with 7 kids!) I'm just saying that knowing my love for words, and the chance to leave a bit of a written legacy for my own kids, it seemed like the thing to do.

None of my family, including my wife has seen any of these entries, except me. That is intentional on my part, as I'm one of those who doesn't really like people seeing my work until it is finished, (and preferably when I'm out of the room. I know I'm weird that way...). Most of it is fairly personal, probably kinda gushy and syrupy, so I'll leave that for both of the kids and their mother to read when the time comes. I always thought I'd give it to them when they turned 18, but that seems kind of early all of the sudden, so maybe I'll wait until they go to college, or get married. Hopefully it will be something they cherish, not like that box of special school projects that we have stashed in the basement.

In recognition of her eighteenth birthday, I'm posting the first entry from that journal. It's actually spread over three entries on two different days because, well, that's what happens to new parents. If you've been there, you'll understand.

I finally found a moment to pause and reflect on that special day that was almost 4 weeks ago now. Unfortunately your (sic) starting to fuss in your bassinet at the moment and so I'll have to put this aside for a short time. When you're old enough to read this, we can both laugh about it, but for now you're not so happy.

Well, the feeding is done and you're down in the middle of the living room floor kicking and grunting. You do not like that bassinet. Oh well, whatever works. Mom's out in the kitchen making Christmas cookies and I'm trying to relax, care for you and listen to a little Bruce Springsteen.

Back to that special day. Mom woke me about 3:15 with a shot to the ribs. "Jim, I think something's going on," she said. From there it was off to the races. After struggling with the clinic staff over the phone about Donna's "phantom Doctor," we loaded the car, Donna grabbed the scream bar and away we went down I-94.

We got to the hospital in good time and settled in our room for the long haul. After 4+ hours of heavy, steady contractions and then 3 hours of hard, focused pushing, there you were. You were kicking and screaming much like you are now. (Gotta go for the moment. You need a diaper or something.)

Back to your birth. I'll never forget your Mom's first words when she saw you for the first time. She said, with tears in her eyes, "Isn't she beautiful, Jim?" I had to agree that you were the prettiest baby I had ever seen. You had what looked like my lips and mouth, and Mom's eyes and cheeks. All of this was topped by a full head of thick, brown hair, also a "mom trait." 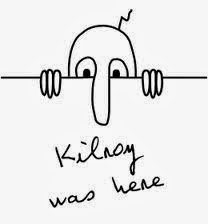 After what seemed like a day and a half, (actually about an hour and a half) they brought you back. You had your little mittened outfit on and of course had your hands up by your ears as you did through much of your infancy. We nicknamed you "Kilroy" for the Kilroy was here figure that's so well known.

You slept most of the day those first few days, so Donna and I spent most of our time admiring your beauty.


So there it is. Nothing great, no great literary genius going on, for sure. Just a heartfelt account of what was going on in our lives during this happy time. There's probably a hundred pages of entries like this in the journal, and while it is far from my finest work, I'm certain it and Ben's journal are my most important. I've always said that if I never get that book I've always wanted published, I've already written two epic books - Bestsellers of one copy each - and I'll defend that claim until I'm dead and gone.

Happy birthday to the sweetest daughter a father could wish for.