November 13, 2013
I just returned from a two day conference in Green Bay. It was the ESRI WI Users Group (EWUG) annual meeting and for the second time in 3 years it was held at Lambeau Field. The stadium has meeting rooms and banquet facilities in its atrium and it really worked out nicely for this conference. I've been to a few games at the stadium, so it was not a totally new experience for me. Every time I visit it though, I am more blown away by the behemoth that it has become.

Lambeau leaves all other football stadiums in the dust with regards to fan experience. You just cant touch it. It's second to none. At the same time, during the renovations, they took a football field with history and made it into a destination. All of this was done in the interest of revenue generation, but most of it is done in good taste and with class. It reminds me of Miller Park in some respects, as it's as much an indoor mall as it is a sports venue. Not a bad thing, just not your daddy's ballpark. 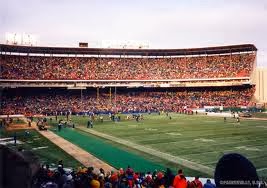 My visit brought to mind some of the other parks I've been to for football over the years. When I first moved to Milwaukee, I was shocked when I learned that the Packers actually played 2 or 3 of their regular season "home" games in Milwaukee at County Stadium. I went to a few of those games back in the 80's when the Packers were pathetic. While it was great to be able to see the Packers play (because a ticket to Lambeau is hard to get),  that's where the nostalgia ended. County stadium was nice for baseball, but brutal for watching football. The sight lines were horrible, parts of the field were dirt because of the infield, and the players from both teams had to stand on the same sideline.


The time I took my wife Donna to see the Packers play Jim Kelly and the Buffalo Bills was quite memorable. We sat down low so in some cases had to look over players heads to see the action. Donna had a good time except for the bloke next to us puffing on a cigar, back when that was socially acceptable. We've come a long way to the smokeless stadiums we now have. (This is a good thing.) 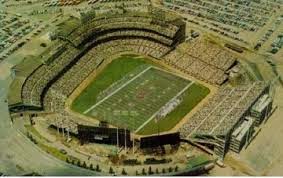 As bad as it was, watching football at a baseball venue was how I experienced my first NFL game. My step-father brought me and my step-brother to a Viking preseason game in the early 70's at Metropolitan Stadiun (aka the Met). I knew then I was hooked on the sport and have loved it ever since. The met was where the Vikings had all of their home games until the Dome was built. Playing outdoors in MN in winter was as tough as it sounds.

I've also seen the Packers play at Camp Randall Stadium which was pretty cool too. They used to play one preseason game at Camp Randall, and I saw them play the New Orleans Saints in the early 90's. A better venue for football than County Stadium for sure. Someday I'd like to get up there to see an actual Badger football game. Bucket list.

I've been to Soldier field once too, but it wasn't for football. There was a Christian men's rally there one year and they almost filled the place. It was a hot, July day, but a good day nonetheless. I'm not familiar with all of the renovations of Soldier field, but I'm not crazy about how it looks. It's a little space-shippy for me. Just my opinion.

Now I see the Vikings are going to be building a new domed football stadium to the tune of several jagillion dollars. It's a sensitive topic up that way, but you have to do those things if you want to keep a team these days. Like I said, this isn't your daddy's (or my step-daddy's) football franchise. I'm sure it will be built with great professionalism and be a spectacle to see, just like Lambeau. It'll be on my bucket list too, and I might even leave my coat in the car.