Have It My Way

My 15 year old son has hit the teenage years where it seems that all he does is eat, sleep and go to school. Our food bill with two teenagers in the house has risen significantly now that we have two teenagers around. They've graduated from being fairly picky eaters to eating just about anything that they can find in the cupboards. You know they're growing up when they'll  not only try new things, but will actually cook something on the stove or the oven. Sarah has been known to cook a pizza after she gets home from work at 10:00 PM. I remember those days and did the same thing as a teenager. The other night Ben left one in the oven for about 50 minutes and something like this was the result. >>>

One of Ben's new favorite foods is hamburgers, another phase that I remember going through as a teenager. We grilled out one time and as we were eating, Ben said "Ya know, this burger is really good. I really like hamburgers." I knew we had hit a turning point right then.

Now I know red meat is evil and carnivores are evil, and I know beef is bad for you and I know hamburger is the bottom of the beef food chain. I know. And Ben knows too. I told him it's not something you want to eat a lot of. It should be like a luxury item, or a treat. If you don't know this and keep it in check, it will eventually kill you with artery clogging swiftness.

At the same time, I know that a good burger is just a teeny taste of heaven on earth. I know the PETA folks will hate me for saying it, but it's true.

Lately, Ben and I have been on a "burger tour." Our area of Southeastern Wisconsin has its share of frozen custard restaurants and most of them serve burgers too. Here's a rundown/restaurant review and ranking based on what we've found so far. 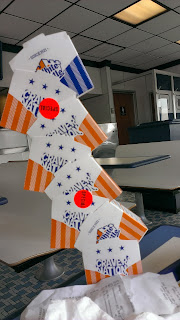 If you noticed I don't include any of the corporate heavyweights like McDonalds or Burger King. I can't eat those any more. They would be a last resort.

There are likely a ton more that are "must have's" as it's tough to make a bad burger.Like I said though, I have to keep it to a minimum or my doctor will hate me. I'm sure the PETA people already do, and I'm okay with that.