November 06, 2013
Our family went to a new church on Sunday. We were feeling compelled to try something new, so thought we would try Transformation City Church in Milwaukee. We've heard good things about their mission of outreach and service, so we thought we'd give it a look. The church itself is built in what used to be an archery range. They've remodeled it, so it is modern and spacious. Like many churches in this day and age, the worship was contemporary, complete with amps, drums and electric guitars. The message was good as well, now we just need to determine if we want to commit to the commute to get there every Sunday which takes 25 minutes. 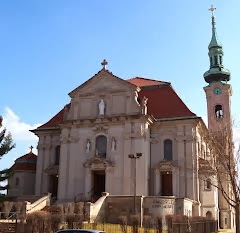 We've been at our current church Elmbrook for twenty years or so. I won't go into why we're looking to change, because this post isn't about that. Instead I'd like to run down some of the churches I've been to over the years. Each of them has their strengths and weaknesses, and all of them played a role in shaping my beliefs and faith.

I grew up in the Catholic church. My first real church experience was at St. Agnes, in St. Paul, Minnesota. It was where I made my first communion and was also where I was confirmed. It is a beautiful old church. I can remember the nuns telling us not to put our butts on the pews behind us as when we knelt on the kneelers. It was where I learned reverence for the holiness of God. Talking (by students) was done in hushed whispers during service, and preferably not at all. I also remember the confessionals and making up some fictitious numbers/events about my sins of the week, just to not appear as perfect. (Which I wasn't anyway.)

After a couple of years at St. Agnes, we moved and switched to St. Lukes which has since become St. Thomas More Catholic Church, though nobody consulted me. :-) It was another mammoth sized church, similar in style to St Agnes, complete with vaulted ceilings and poured concrete design. I attribute the foundation of my faith to St. Lukes church and school. Through five years of schooling and 10+ years of church, it was all I knew. It was where my sister was married, where my step brother and step father's funerals were held, and several other key events. 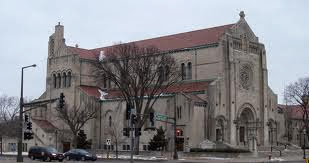 One of my fondest memories was their Midnight Mass on Christmas Eve every year. Rob and I would go every year and every year on the way home (across the street) he would shove me into a snowbank when I least expected it. What are brothers for if not a good hip check into a snowbank, right?

When I moved out on my own, I fell into a church in Crystal Minnesota called St. Raphael's. It was memorable for the youth group that I came to know. Some really great college aged friends that gave me people who I knew in a neighborhood that I was new to. The church services were forgettable, but the people were not, and sometimes that's how God uses the church. 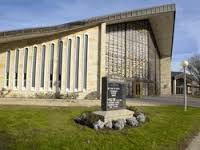 When I moved to Waukesha I tried St. Mary's because that's where my roommate went. It was a paradigm shift to me because it was so "new". I was used to big, drafty, dark Catholic churches of my youth. St. Mary's was modern, new, light and airy. I didn't go every week, I'll admit, but it did provide a connection for me in yet another new place - a new city in a new state for that matter.

When I later moved to Milwaukee, I floundered about, churchless for the most part. I tried St. Peter and Paul a few times, but mainly on holidays. I don't remember too much about it really. I was a faceless attender, looking to fulfill my obligation to attend rather than any kind of spiritual void.

After I married my wife and I tried a couple of Methodist churches in the Waukesha area, but both of them seemed like they were a bit desperate or smothering when we were greeted at the door.

Eventually we tried Elmbrook when it was still in its "small sanctuary. We loved the message and the pastor, Stuart Briscoe. His sermons were challenging, convicting and always interesting. He and that church took my faith to the next level. It made the Bible real, understandable, and relevant to me for the first time in my life. We raised our kids through their great kids/middle school/high school program and were active in many men's and women's ministries over the years.

I guess the point I'm trying to make is that without even realizing it, I've built quite a history of churches throughout the course of my faith journey. While I realize, none of it is tied up in any of the buildings anyways, I can't help but think that each of them had a role in shaping who I am and what I believe. I don't know whether we'll keep going to this new church or not. I loathe the term "church shopping" and I don't think that's what we're doing. We're just restless and looking for a better fit. We may find that there's nothing better out there, and I'm okay with that. It's evident though in looking back through where I've been, it's a whole lot easier not to be afraid of where I'm going.