A Future of Moments

August 30, 2015
It was four years ago today that my brother Rob passed away. It's brutally apparent that while it gets more distant with each year, it will NEVER be something that I ever totally get over. At a wedding we were attending last night, I was talking to my son Ben and he mentioned he'd only been to three weddings. I asked him how many funerals he'd been to (and don't ask me why I asked him such a downer question) and he said only one, uncle Rob's. He then went on to say how it was the hardest thing he's had to go through, essentially an emotional roller coaster. I thought this was interesting because, while you think your kids have it together, you never really know what's going on inside at all times.

I see "moments from heaven" every day as I move about my world. More often than not, as I'm walking to work, a song will come on my iPod that reminds me of Rob, and almost every time it happens, I sight a cardinal - a bird Rob used to listen to and watch from his back porch when he was sick. I can't say for sure those are God moments but it sure makes a guy wonder. Other times, I'll see Facebook posts from his wife or daughters with their big smiles and I see his smile reflected back. If there's one thing Rob did well, it was smile. He lit up the room. 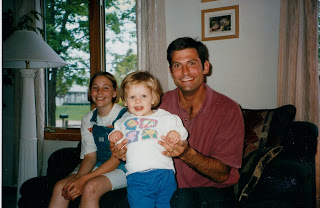 And when I don't have the God moments, I have a lifetime of memories to draw from. Many of the best ones involve a boat, a lake, some fish and a few beers, but many are just the everyday clowning around we used to do. He was always jumping out from places and scaring me - as many other people will attest I'm very reactionary at the receiving end of those things. He was also good with the old "you got a spot on your shirt" trick where he'd hit me in the face when I looked down on it.

I remember one of the proudest moments I've ever had of Rob was when he was with the Highland Park Theater for the Deaf. They put on a production and while I can't remember all the details, (I think he had a big role or even a solo for signing the song The Gambler, by Kenny Rogers, but am not sure) but when the production was done, I remember tearing up. I was so stinking proud of him, that I got choked up.  Growing up deaf in a hearing family must have been incredibly difficult and he never appeared to let it keep him from doing anything. And this production was proof of that. (It also connected him to a great group of friends, many of who he kept in touch with for many years.) 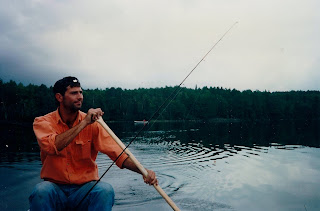 While I am still incredibly sad that Rob is not here to see moments like his two daughters paddling a canoe with their cousin, or heading off to college, or playing instruments in the high school drum line, I rest in the fact that he is reunited with the spirits of my dad and sister in heaven. I have no idea what heaven's like, but if you believe in God, you'd have to believe he'll grant us all at least this much in heaven someday - to see and know our loved ones again. It gives me great comfort knowing that while I'm sure he'd rather be here, he's watching and laughing and crying for each of us while he's fishing with Dad and Linda.

P.S. On a somewhat related note, I saw this 101 Word story the other day and was startled at the names and circumstances of it. It could have been written by me. Check it out.

The Queen Bee said…
Yes. Jim, Rob's Theater for the Deaf debut was signing Kenny Rogers, "The Gambler". I was also there, sitting with mom and probably you too - I think I was pregnant with Erin at the time. And I was totally unprepared for the flood of emotions that overtook me when the stage lights came up and there was our little Robby, cowboy hat and all, all by himself, and looking totally comfortable and confident, signing to Kenny Rogers song. I was so very, very, very proud of him, all these memories of taking care of him and protecting him from bullies when he was a little guy went flashing by, and the terrible fear I felt for him when he was just 5 and mom and I brought him to the bus that would take him to Camp Courage, and away from home, alone, for a week. And now, there he stood, apparently loving the limelight, doing a great job, and I think that's the first time I saw him as his own person, and I was so proud and VERY teary (and you know back then nobody in our family really got too teary!). Anyway, I'll never forget that moment...just hope Rob knew how we all felt...
October 25, 2015 at 7:33 PM