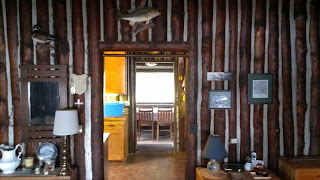 This past weekend I went back to Minnesota to celebrate our family reunion near St. Cloud. The event was held in a cottage/cabin built by my grandfather in the 1930's. It is a dazzlingly unique structure in that the logs used to build it were set vertically, not horizontally like most cabins. I heard this weekend that Adolph (my grandfather) said that was because "that's the way trees grow." It's hard to argue with that logic and a mighty unique structure came out of his thinking, so there's that.

A word about my travels to and from Minnesota are in order first. I took the Megabus from Milwaukee to St. Paul, in order to free up cars for my wife and two kids who all had to work. Now, I've been on worse trips, but I did make a few observations. Things like, how about everybody switches their cell phone to vibrate for the duration of the 5 hour trip? It was like the Southern Bell and Telephone switchboard for a while there for crying out loud.

Only they weren't rings at all. One was like a woodpecker sound. Another was a rap intro. There was too many to count. For those of us who were trying to sleep it was "Alarm Fest." It made me long for the days before cell phones when all you did when you rode the bus was ride the bus.

Of course there were other annoyances, like a poorly located AC vent that blew on me the whole trip. And then there was the guy next to me who put his arms and head in his shirt and went to sleep like a turtle in a T-Shirt. And finally there was the woman talking on her cell phone for 40 minutes like she was in her living room. Actually, it was like thirty of us were in her living room, all helping her make the call.


Ride aside, the rest of the weekend was really, really good. For starters, I got to spend a couple of nights at my brother's condo with him. This gave us a great chance to catch up and talk about a lot of things. It was funny, but at one point he admitted that Rob's death, as hard as it was, changed his relationship with me. I've been thinking that a lot myself lately. It's changed how ALL of us relate to one another.

The actual reunion started on Saturday afternoon. I hadn't been to a reunion for ten years (they hold them every 5 years), so from the moment I arrived until about six o'clock at night I was talking to one cousin or another - many of whom I haven't really talked to much over our lives. People were incredibly gracious with their words about Dirty Shirt. It was nothing short of moving to hear their comments. It made all of the work I put into it even more worth it. 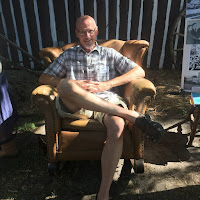 One of the cooler things that happened was I got the chance to sit in my Grandfather's rocker. My
cousin brought it in his truck. The interesting story is there are several cigar burns in the arm of the chair. I actually wrote a fictional short story about the chair that I'm looking to get published somewhere. Sitting in it was a fun memory.

Other than the warmth and love I couldn't help but feel, the biggest takeaway from the day was that I found out a few more details about my father's character and even more about the night of his death from various people. I'd like to say it helped clear up what really went on, but in some ways it only made it more confusing. I won't go into details here, as much of this is quite personal, but suffice it to say that the injustice of it still stings almost 50 years later. Much like I wrote in Dirty Shirt, many of the details will likely have to wait until he and I are sitting around that fire pit in heaven someday.

Once the party dispersed, my immediate family (Mom, my two sisters and brother Paul) set up camp on the beach for a sunset cocktail and some laughs. There were clear skies and a warm breeze from Grand Lake, perfect for sitting lakeside and talking with family, something that's been going on at "the cottage" for a couple of generations now.

It was a lot of goofing around, reminiscing and storytelling. And I have to say I laughed harder than I have in a long, long time. It was our own little mini-reunion. We spent it enjoying each others' company and just soaking in the moment. I think part of it was because we all know that in five years it could be a much different group. Rob's passing has made each of us brutally aware of our own mortality and in some respects has helped us see past our differences a bit more easily. We've all got our quirks, hangups, vices and idiosyncrasies, but at the end of the day, we're all we've got for each other. It was a great night, one I'll never forget.

Sunday brought fishing and relaxation. I had the privilege with my brother Paul to help teach our six year-old grand-nephew how to fish. Once he learned the ropes, he was hooked (so to speak). He was obsessed and before the day was done, he had twenty sunfish to his credit. He even offered to give me one of his so my "count" of five would be better. My sister said we were training up the next generation of Landwehr fisherman, which is pretty cool when I think about it. I really love the excitement of young kids when they catch their first fish, so this was a great ending to a quality weekend.

And I know the whole weekend we were being watched from above by Dad, Rob and Linda, not to mention all the granparents and uncles and cousins who went before us, who were having a reunion of their own in the skies of eternity.

And I miss them all.

The Queen Bee said…
And I miss them all, too, Jimbo! That was a great night together and hopefully we can do it again next summer because, as you said, the family dynamics are going to be much different..soon...so let's make what we have now last as long as we can, must not let what time we have left slip away because of busy calendars. Not sure if you are getting my "drift", but as good ole Bobby Zimmerman once said, "the times, they are a'changin'....
October 25, 2015 at 8:00 PM