The Not So Main Event

August 16, 2015
Sunday is supposed to be a day of rest and, for the most part, today was. There was a couple of hours however where I was performing computer support triage. ("I'm a mapper, Jim, not a Doctor!") Here's a little of how it went.

For reasons only I understand, I decided to update my son's Dell laptop that has sat idle for over eight months. When he finally gave up using it at that time, I wiped the hard drive and reinstalled Windows, thinking it would be a good "backup" laptop, which it is. But ever since I installed Windows 10 (which I've come to love) on my own Dell laptop, I've been thinking I should put it on his old one too.

Because I am a helpless geek and it must be done. Tweet this

Well, as it turns out, you must get all of your Windows 7 updates onto a computer before it becomes upgradable to Windows 10. Since the laptop had been out of the loop for so long, it meant at least six or seven "groups of updates". Why not one big group of updates, I'll never know. So I chipped away at the clumps as they appeared.

As this was happening, I began troubleshooting Ben's desktop computer, which has been giving him problems for six months. He's replaced his RAM and power supply and had a couple hundred dollars worth of diagnostics run on it. He is frustrated with it and ready to give up and start building a new one. Being the worst kind of support tech - a geek who's cheap - I feel we should try and fix it ourselves.
So I dive into the Event Viewer, a troubleshooting/log file kind of thing for showing what happened 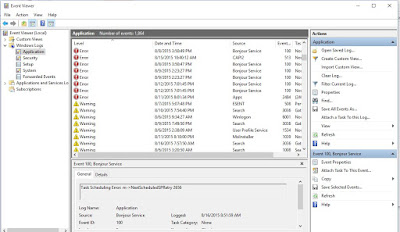 at the time of a crash. It's a collection of mumbo jumbo that means not much to the average Joe. (Most people don't know they have one. Those mere mortals!) But to me it's a window into the soul of Windows. For the most part, it's mumbo jumbo, but can at least give you a clue as to what's happening. Look for the Red Exclamation Points and start there.

Anyhow he was getting an OHub.exe error. So I did what all good techs do. I Googled it. Ironically enough, the only apparent answer was to uninstall an "Upgrade Office Now" program that appeared with Windows 10.

To which I reply, "Are you new to Microsoft and Windows?"

Ben hasn't tried playing the games since I applied my expertise, so we'll see if it magically fixes it. I'm not holding my breath. There's a reason I'm a mapper and not in Microsoft tech support.

My PC support triage was completed when Sarah said that she installed her DVD Writer (by herself, mind you, makes a daddy proud!) but said that it wasn't reading the disk. I helped her by trying to find out if the drivers were installed. After some fiddling in the BIOS (the guts and heart of a PC), we rebooted and sure enough, it worked! We concluded that while she had "shutdown" and powered up once, what really needed to happen was a simple restart in order for it to show up in Device Manager.

Evidently there's a difference between those two in how a device becomes visible. Thanks again, Microsoft.

And so, as I see it, it's a win/loss situation. I've lost two hours of my Sunday that I will never have back. But I've gained at least two out of three computers out of the deal. More importantly, I had some laughs with Sarah in the process and learned a bit along the way.

Now, I have to go, as it looks from the screenshot above, that I have some "Bonjour" errors to worry about in my own Event Viewer.

Blogging off and Bonjour...