August 20, 2015
A little known fact to many who know me is that I actually have a degree in Anthropology, (What?). Well, actually, I double majored in Anth and Geography at the University of Minnesota. It was a long winding journey through college, one that took 5 2/3 years (the last year was part time) because of all the winding. Back then, college didn't cost your first born son and a small home mortgage. In fact, with help from my mom, I managed to get through school without one dollar in loans.

It was a different time. A time when education cost what it should.

Anyway, the winding I speak of started with a poorly defined major. I started out in Computer Science. When I was assured that that major was A LOT of math - not my strength, to say the least - I quickly changed to an undeclared major.

I flopped around with undeclared as long as they would let me, so when pressed, I declared Anthropology, mostly because it was the I really liked the couple of classes I had taken in it. I'll be honest, I had no clue what I was going to do with a degree in it, nor what I wanted to do in life. Who does at 19 years old?

Three years in, I added Geography as a second major, because, as we all know, combined with Anthropology that was a much sought after skill set in the mid-80's. Ha! I picked it for much the same reasons. I had taken a few classes and really enjoyed them. Then, later in my third year I took an Introduction to Cartography class that was amazing. As I spent many, many hours in the Cart lab, I thought to myself, if I could do this for a living, I would be a happy man. 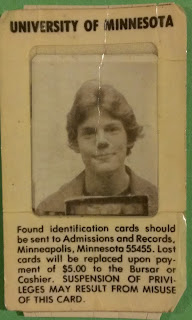 Well, some stories have a happy ending. I've been blessed to work in mapping and GIS for thirty years this past June and I've never regretted it for one minute. I started back in 1985 doing manual mapping, scribing contours onto maps of a Middle Eastern country, which I think was probably Iran who at the time we were squabbling with. I did it for a laughable $5.00/hour out of college. Many of my friends were in disbelief. It was actually two dollars less than I was making at Montgomery Wards. But I saw it as invaluable experience, so made it work.

After a 10 month stint there, we had a wave of layoffs and I surfed my way on that first wave. Or, rather, I was surfed, so to speak. My little bit of experience there got me in the door for the "Computer Mapping" job in some little city outside of Milwaukee known as Waukesha. (What? Again.) I didn't know where it was, but I did know I was jobless, so I packed up and moved.

It was a move that changed the trajectory of my life. At the time it seemed to be the desperate thing to do. I wasn't really looking 30 years out, but needless to say, here I am. And again, I've had a fulfilling career in Wisconsin doing something I absolutely love.

I guess the moral of the story is, chase your passion(s) and good things will follow. I think if you work hard, show up for work every day, and give your best, the rest falls into place. It seemed to work for me, anyway.