Christmas On The Continuum

December 24, 2015
Today is Christmas Eve, which for my extended, Minnesota family, is the "real" Christmas from a celebration standpoint. Everyone gathers at my sister Jane's house for a meal and kick-out-the-slats present exchange. We have been gathering at her house for almost twenty years now and today we will will gather one last time. Jane will be selling her house this spring in an attempt to downsize before she retires.

And while I know this will be a hard event for her, it will be hard for me as well. There are a ton of good memories from that house, most of them built around holidays and special events. 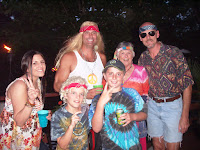 So, the pending sale of my sisters house brings to mind my own home that we lived in for 15 years as a family. I recall vividly when Mom first put the Portland house up for sale, my brother Rob said to her, "I DO NOT like that sign out front!"

At the time, Mom and Paul were the only ones still living at home, and she was trying to get out from the burdens of old house ownership. Her reply to Rob still resonates with me today.

"Rob, the house is just a house. You can take the memories of the house with you your whole life. It's just a structure. It's the people and times that were part of it
that matter."

As we change our living places more and more these days, that is good advice going forward.

Unknown said…
What a stunning post on Christmas Eve. I love reading through this post. Your Christmas night pictures are way too adorable. I also hosted a fun party for my family at some popular San Francisco venues. It was truly an enjoyable night and we had great time together.
February 2, 2016 at 10:40 PM

Thanks so much for your nice comments. It means a lot to a writer when people are moved enough to say something. I'm glad you liked it. (I'm curious how you got to it being that it's 6 weeks old, but it doesn't matter.)

I've got another one from a year ago that is one of my favorites. Check it out sometime.