Working Toward An Understanding

March 17, 2016
Last Sunday, our church, Collective MKE, hosted a group (or troupe) called A Jew, an Arab and a White Guy at St. Matthias Church in Downtown Waukesha. We rent the church for our own gatherings once a month or so, so this fit the bill rather well. My only wish is that we could have packed the place, because the message was so enlightening and helpful.

The idea behind these meetings/gatherings is to foster dialogue, discussion and cross cultural awareness between ALL people. Not between black and white or Muslims and Christians, but all people. All humans. Because that's all we are when you strip away all the labels we tend to stick on each other. 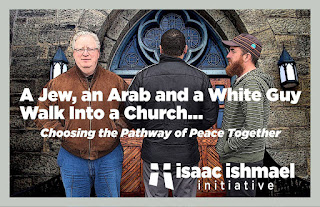 All three are practicing Christians, but that is not at all what this was about.

It was about understanding one another.

As I sat there listening, I was fascinated about how similar their three stories were, yet how different. Each was raised in their own faith yet their stories were interwoven; their faiths even shared some of the same gods and prophets.

The Christian guy told a story of when he moved to Colorado and when he heard a couple of college kids speaking in Arabic on a train, he spoke to them in Arabic and was shocked to find out that in the three months they'd been there, he was the first person to speak to them. They spoke English, but because of their looks, people avoided them...for three months.

It was eye opening.

And it's no wonder we can't get along with people outside our tribes. The same guy had a nice phrase when he said that we are great at "othering" people. As a white guy myself, I am as guilty as anyone at this (though am brutally aware and continue to work on crossing over/reaching out.)

I am a terribly empathetic person to begin with. I feel for peoples' hurt. So when I hear stories of injustice, racism and bias, it grieves me. I can remember in my Catholic grade school, their was a Jewish kid who got called all sorts of crappy things. It almost made me physically sick. And the only reason it was done to him was the ignorance of those doing it.

I'm not sure where I'm going with this, but suffice it to say, I have a better understanding of what barriers are there and I'm going to continue to try and break some of them down in my own life. And events like this are a good start.