Under The Shiny Veneer

April 03, 2016
As I worked and relaxed around the house this weekend, I kept coming across our little piles of chaos. I hope you know what I'm talking about, and that our family is not alone in our little chaotic piles.

You know the ones: 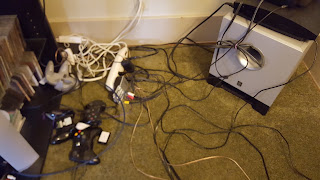 I bring up these instances of chaos because in this day and age we are so concerned about appearances. Everyone wants to have that "I've got it together," look to them - in the way they dress, the way they live, even the car they drive. (Our engine light is on again. A little electrical tape might fix that problem. I know where to get some. The Junk Drawer!)

But the truth of the matter is none of us really has it all together. (If you do, you're not my friend. Just kidding. No, not really.) Behind that meticulous living room, more often than not is a closet stuffed with intangibles, drawers chock full of doo dads and doo hickeys, and an electrical grid that would make most electricians develop an eye twitch.

Its just how we roll. If you're one of the unwashed brethren that knows what I'm talking about, rest easy that if I come upon some of your skeletons in your closet, I won't judge. Because I have a few of my own. All I ask is that you return the favor. (And stay out of that closet, please! Don't look in there!)

And if you're not among those who know what I'm talking about well, the friend thing again.