A Guest In The New House

September 11, 2016
This past Thursday we volunteered to serve the guys at the Guest House. If you know Donna and I, you know this is often the best evening of the month for us. It is such a blessing to be able to serve dinner to 86+ guys once or twice a month. (We do one night with our Facebook group and one under the auspices of our church, CollectiveMKE.)

I need to preface this with the fact that Donna does the lion's share of the work for this every month. I only help serve it, whereas she solicits donations, plans and cooks the food and gets it ready for transport. I am just happy to help in whatever capacity I can.

Anyways, my point is that they have done some serious renovations to the Guest House kitchen, office space and living quarters. As a point of reference their old kitchen was smaller than my kitchen, so when we heard their plans for upgrades, we were ecstatic.

On Thursday we were literally the first group to prepare a meal in the new kitchen. They did a spectacular job with the remodeling. Everything is stainless steel, state of the art and new. I would guess the kitchen is about four times as large as the old one. It was a joy to work in.

That's not to say the meal went perfectly. There were some issues with not enough table space and some flow issues. To add to the matter, we tried a new meal - spaghetti - which posed some unexpected issues. We timed things a bit poorly as well, so were scrambling at the end to get the food out.

None of this dampened our spirits, though. We were excited to be in such a nice space. At the same time, the downside of a new space is everything is NEW and you want to keep it looking new. So we were overly conscious of spills and slops - all of which we cleaned up at the end. 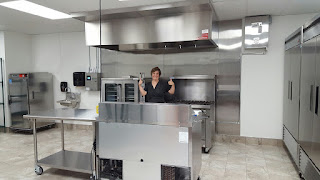 Despite all of our new space SNAFU's we got it done and the guys loved it. As I said, I am grateful to be able to help where I can and it is such fun serving alongside our good friends. They are all "worker bees" who make it seem hardly like work at all.

I am thankful too for the friends and people on Facebook who contribute money or food every month to this great cause. You are instrumental in changing men's lives. Realize that, and own it. It may seem silly to say that giving soda or pasta, or condiments is changing lives, but it's all part of it. You are all spokes in the wheel to getting these gentlemen back living independently and turning their lives around. Thank you.

And I am super thankful for all of the donors and agencies who contributed financially to enable the renovations/addition. A project this big costs big money. Not to mention that there were some unexpected costs of the addition when the construction crew encountered human remains while digging the basement. It turns out there was a graveyard on premise before the church building went in. It seems they moved the headstones, but not the graves. It required getting an archaeological and forensic crew to move and document the remains.

If you'd like to find out more about the Guest House of Milwaukee, Click Here to visit their website. It is one of many agencies that treats people with dignity and respect as they struggle to reshape their lives. Great stuff!