September 01, 2016
Today marked the first day of classes in the Waukesha school district. In our case, as my wife pointed out, it was also the occasion for our last "first day of school" for our kids. Ben is a senior in high school this year and so there will be no more first day pictures or first day front door dropoffs.

I asked her if she cried when she dropped Ben off and she said no. She said she was really alright with it and she was ready to be done with getting kids off to school. I countered that I probably would have gotten a little misty eyed, but that's because I'm a big emotional sap when it comes to nostalgic things like this. We've always said that I'm the sentamentalist in the family, this was proof. 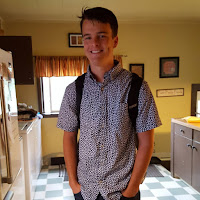 So the day was uneventful, according to Ben. "Kinda boring," I think were his exact words. A little change from grade school where the enthusiasm of learning and being with friends sort of oozed out of his pores.

It made me think back to his days in elementary and middle school. Like most families, our kids are wildly different creatures from one another - Ben a raging extrovert and Sarah more reserved and introverted. He and his posse of neighbor friends used to walk to school backpacks in tow and cell phones just a distant reality. Where does the time go?

I think back even farther to when I was in Kindergarten. Back then there was no pomp and circumstance picture taking on the first day of class. You walked to school and that was that. I remember nap times on our little rugs we had to bring. Later when we switched schools from Mississippi Elementary to St, Agnes, I remember my Tarzan lunchbox, the one that the latch failed on one day while I was crossing the street, only to have my glass-lined thermos go crashing to the street.

My days in the Catholic school system from St. Agnes, to St. Luke's and eventually to Cretin High school were mostly good. I look back with very few bad experiences, and many good ones. Being that mom raised 6 of us more or less on her own, we were left to figure a lot of stuff out on our own.

She made sure we had stuff to make our own lunches, that we had clean school uniforms and that we were well supplied with notebooks, pens and glue. Over the years there were many "lost" permission slips, innumerable sick days - some of them faked - and occasionally a lost book, but somehow we all made it through. There's a reason I refer to her as St. Mary.

And so to think that all of that is behind us as parents is a mixture of gratifying and sad. We've done okay - and super-kudos to my wife who bore the large brunt of much of the off-to-school duties - but this begins a new chapter in our lives and it feels weird. Sometimes I don't like it so much.

Well, at least until we get that first "I forgot my lunch/note/swimming coat/permission slip" call from Ben.

In nine months it will all be over, and I guess I'll have to be okay with that.