A Party On The Iceberg

December 01, 2016
Well, I had my hearing test/evaluation today, and let's just say that if it was the ACT exam, I'd definitely want to retake it.

I pretty much failed with flying colors.

Now, I;d had my ears tested about 8-9 years ago, I would guess. Back then they told me there was some loss and that I should probably consider a hearing aid somewhere down the road. Now, when you say this to a man, "down the road" means 8-9 years down the road. Not a big fan of doctors...

Anyways the whole experience was fairly stressful in a strange way.

Once I filled out all the paperwork asking questions like what types of situations I would like to hear better in and things of that nature, I was taken back to the soundproof booth. There the Doctor and her intern asked the same questions. (Why?) Next she told me how the exam would be conducted. It was basically 3 parts.

It was clear, this wasn't my daddy's hearing test with just a series of beeps.

As they started making the noises I strained to focus and listen. For the first few notes, I clicked away. They seemed to be timed roughly the same length apart from one another, so I could almost fake it. Until I couldn't hear anything....and I was pretty sure she was making sounds, because when I didn't respond, she kept reacting in a way that was telling. A couple of times I faked it when I thought I should be clicking.

Because lying on a hearing exam, well, that helps make me look not so deaf right?

It was clear I was taking this exam personally. To me they were grading on a curve and I was shooting for a C+, because I know my ears and they're not honor-student ears.

We moved on to the second test. I got most of those right - I think. The one I may have made up had something to do with a party on an iceberg. That might have been a guess on my part. Haven't heard much talk about iceberg parties - unless maybe the test designer was from Antarctica. That could happen.

The best/worst part of the test was the last part. I had little issue when they had just a few people as background noise. "The footpath to the lake was well lit." No problem. But as they turned up the ambient noise, suddenly I was hearing things like "...occupied territory...on the dogs."  (Was there a "niner" in there?)

Now, this pretty much sums up my past couple of years at any party. I do a fair amount of what is known as the "deaf nod". Yeah, I heard you (no I didn't).

I told the doctor that by the time they had reached the "peak volume" of background noise was around the time that I left the party. I then asked her if people can really hear the sentence of the speaker in that last situation. She said, "Yep! People with normal hearing could hear that fine."

When she gave me the results she mentioned that I had "moderate to severe" hearing loss, especially of high frequencies. Most people start hearing speech in the 8-12 DB range, I am in the 25ish range. She may have said I had a 60 DB loss, but I'm not sure. There were a lot of numbers, graphs and facts flying around at that point. I was a little like the cancer patient after diagnosis. The whole room was kind of spinning. (Just kidding, but it was eye opening.)

In any case I'm going to be fit with a pair of very expensive behind the ear hearing aids. And by the time I walked out of the office, I'd come to the realization that vanity is stupid and that I should have done this 5 years ago because it will be good to hear again.

Ironically enough, later tonight when I was walking the dog, the song "Hear that sound" by INXS came on my iPod. 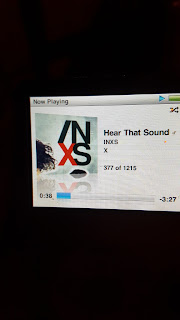 The answer is, no, I don't hear that sound.

But I will soon enough. No more occupied territory on the dogs for me.

Unknown said…
Glad to know you've succumbed to reality. I can't hear squat above the tinnitus, but I pass hearing exams like a champ. So frustrating!
December 3, 2016 at 3:15 PM