April 02, 2017
This was one of those weekends where every time I turned around I saw the triumph of the human spirit. I saw people living their lives to the fullest, pushing themselves and making the world a more beautiful, enjoyable place to live. And I'm not sure if it is my age or just an awakening of some sort, but when I see things like I witnessed I take hold of them and it restores my faith in the world and in humanity. With all the darkness and despair in the world today, when I see points of light from anywhere, or in the case of this weekend, everywhere, I regain hope for my kids and their kids. 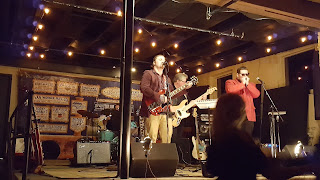 It started on Friday night when we went to see a couple of blues bands at Anodyne Coffee Roastery. The warm-up band was named Big Al Dorn and the Blues Howlers, and they blew the doors off the place. And I am a sap for live music anyways, but to see these talented young musicians playing their hearts out and playing the blues like they were meant to be played, just made my heart soar. The lead singer also played harmonica and guitar on a few numbers and was a testament to the gifts and abilities artists are capable of with commitment, practice and applying themselves. They were followed by The Reverend Raven and the Chain Smoking Altar Boys a band of older guys who were phenomenal too.

Musicians pushing themselves as proof of the creative triumph of human spirit.

The other part of the Friday night thing was the dance floor. It was filled with people, most of them over 55 years of age I would guess. And while my friend said that it was like being in a Cialis commercial, it was also so cool to see people of that age out there enjoying life and not giving a damn what people thought.

Evidently there are clubs for these kinds of folks and while it's not for everyone, I give credit to people who are not letting age slow them down. It's much easier to live life in a barcolounger, but these people were a lot cooler than that. I'm not quite ready to join that club yet. Talk to me after 60 when I really don't care what people think. Ha!

Old people pushing themselves as proof of the triumph of human spirit.

Then on Saturday I had a local author fair at the New Berlin Public Library where I and several other authors were hawking our books. And while the sales were slow, I still met some of the coolest people. One guy I was talking to was sharing some of his story and while he was very humble, when I went online and looked at his website, I saw that he'd written professional articles for NASA, taught English in Korea and a ton of other fascinating history.

And I met a couple of teen writers who were telling me how much they enjoyed writing fantasy stories. I urged them to keep writing - keep following their passion - and that it will carry them far. It was refreshing to see kids engaged in something that didn't involve a phone or a screen.

Young people pushing themselves as proof of the triumph of human spirit.

After the event when I got home, I was walking to our local library to write a bit and saw a track meet going on at Carroll University. I stopped and watched for a couple of minutes and was transfixed. Again, I don't know if it was the beautiful weather or my age or what, but to see high schoolers chucking Javelins, running distances, long jumping and pole vaulting just made me glad to be alive. It's weird. I can't explain it. It's and old guy thing, I think - because that used to be me. It's called living life to the fullest and it starts in high school I think - maybe even before.

Athletes pushing themselves as proof of the triumph of human spirit.

Once I arrived at the library, I found they were featuring an artist exhibition from local high school and technical college. As I gawked at the works before me I tried to get into the mind of the high school artist. This stuff was beautiful, and bizarre, and creative and wonderful. Some of the same people that were out chucking javelins were drawing some of these charcoal drawings, these oil paintings, these sculptures. It was humbling.

Artists pushing themselves as proof of the triumph of human spirit.

And it finished out today as I attended a fellow author's book launch party. This is a woman who was in my class 7+ years ago at AllWriters Workplace. On several occasions she has cheered me on saying "I remember when you first started writing your Boundary Waters stories so long ago. Now you have a book." And now SHE has a book, because she stuck with it and persevered.

Writers pushing themselves as proof of the triumph of human spirit.

So, tonight my heart is full. My faith in humanity is restored and overflowing. There is so much goodness and beauty and passion in the world. And with that we all need the reminder that to experience that we need to get out of our safe little bubbles and experience it, be it, and do it.

We need to live, dance, sing, paint, write, run, jump, draw, interact, engage and open our eyes to the beautiful world and its people around us.