April 16, 2017
I helped a friend with his patio yesterday. He is a longtime friend and over the years we've taken to helping each other out with home improvement projects. It is what good friends do for one another - like family without the blood relations. 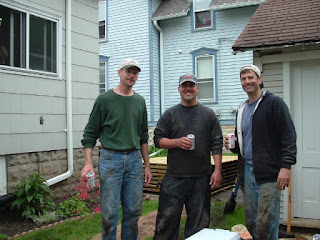 While the day was good, spent with a friend, followed by a drink on their deck afterward, it was not what stood out to me on the day. No, that was something much more sobering.

As we were driving out to pick up the gas powered compactor, we came across his neighbor, Bob who was puttering in the alley. Bob was probably in his early sixties and was hobbling around like he was in pain. When Steve stopped and said hi, he asked Bob how he was doing. Bob told us he was in a lot of pain. He'd had a couple of cortisone shots in his back a couple of days prior, but it hadn't touched the pain he was having. He went on a bit about his options coming up and after a couple of minutes we told him to take it easy and went on our way.

Then, after we had compacted Steve's patio, we were driving down the alley and came across another neighbor down the block. His name was Mike.

Steve said, "Hey Mike, I see you grew all your hair back. How's it going?"

"Well, the Doctor said I'm 'stable,' whatever that means."

We talked a good while with him. Turns out he has brain cancer. He showed us a 7 inch scar on his scalp and said that there was much of the tumor that they couldn't safely remove.

After some more questions from us, he revealed that he was terminal. Doctors say they don't know how long it could be, but likely 3 years or less. Mike is about my age - mid 50's.

Now, before yesterday, I did not know Mike from anyone. I still barely know him. But his news and his circumstances were positively sobering. Steve and I both shared our stories of losing our own brothers to cancer in the same year. Cancer was our common thread - our connection point.

And it shook me up.

It made me realize once again that what matters most is hearing from other people that they are thinking of you, that you are praying for them, and that they care. It made me reaffirm how I need to keep looking at my life and living it with a sense of urgency. There are important things to be done, and hoarding material possessions or envying someone else's house, or dwelling on petty grievances, building wealth, worrying about having enough for retirement and other such things is a monumental waste of precious time.

Help someone, tell your kids you love them, spend time with friends, feed the poor, pick up litter (and tomorrow, pick up more), mind your diet and health, love your spouse or significant other or niece or nephew or parents.

I don't mean to preach, but life is short. Do it well.