April 20, 2017
I have mentioned in past posts that my Thursday mornings are spent drinking coffee with anywhere from one to four other friends at Café De Arts in Waukesha. We typically try and work our way through a book, often times by an edgy Christian author like Brian Zahnd, Peter Rollins or Rob Bell.

While I don’t always align 100% with the teaching or proclamations of each of these books, I cannot deny that they all challenge me to think outside the box. They often show me that I am comfortable putting my faith or my God in my own little box. I won’t go into specifics of each, but I’ve come to the conclusion that if I am not questioning what I’ve always believed, then how will I ever grow in my faith.

Anyways, a bit of a tangent there. 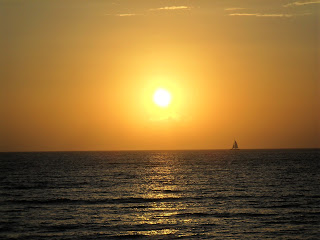 Our discussion today turned toward heaven and hell, but mostly heaven. We started by postulating what heaven was like. It made for some interesting and, as often with this group, some far-out ideas. Those far-out ideas would take turns and devolve into humorous abominations of the original idea. In other words, we sometimes stoop to laughing about it because it is such an incomprehensible subject that we don’t know how else to deal with it.

Some of the ideas were:

Working 24/7 – Someone had the crazy thought that what if when you got to heaven, you got a shovel and a wheelbarrow and were set to work to make Earth a better place? That maybe if your time on earth was well spent (Well done, good and faithful servant) that God put you on the fix earth team. And that for eternity, heaven wouldn't be lounging around on clouds, but work - enjoyable, rewarding work, unlike any here on earth, but work nonetheless. I guess I never thought of it that way. It lead to one of the guys asking if there would be break times. Because. that's important.

Singing 24/7 - Or maybe we will spend our eternity singing as a form of worshipping God. One friend admitted singing wasn't his gift, but his grandmother would be ecstatic. The guy went on to say that it might get to be a little much after about the first 1000 years of singing. "Okay now, verse 3,446,410. Sounds a lot like the last one."  Of course someone asked if there would be breaks.

Hobbies 24/7 - Maybe heaven is nothing but things you enjoy the whole time. Or maybe you're limited to One Thing. (What would yours be? Mine would be fishing.) The consensus was that even something you really love would get old after the first 1000 years. This led someone to ask if we could maybe take breaks from our hobbies to work a bit on some emails for work or something? Never thought of having a hobby become old and tiresome before.

Sunsets/Sunrises/Natural Beauty 24/7 - Maybe it is that stunning waterfall or rock formation or Redwood tree or maybe all of them in a constant loop.

Father/Son or Parent/Child Moments 24/7 - This would actually be one of the more appealing ones. If you were on a constant loop of moments between Mother and Daughter, or Father/Son, but maybe you saw it for everyone that's ever lived. Kind of a cool thought, With breaks of course.

Not every Thursday goes this deep or this philosophical, but it's always a great way to jump start my day. We don't pretend to know all the answers to any of it, but it's great fun poking at ideas and seeing what seeps out. This week we didn't touch upon Hell much, but maybe that will come up next week.

What would your ideal Heaven be?