View From The Lido Deck

About 15 years ago or so, some friends and I tore down a shed that was attached to our one car garage. The shed was beat and the floor was caving out from under it, so we took chainsaws to it, busted her down and put it in a dumpster all in an afternoon.

Because my wife and I are YFP, yard fail people, the resulting square footage sat unused like that for the next 15 years. Oh, I did build  a terraced garden out of some of it about 8 years ago, but the bulk of the area became our RGWB, rock garden weed bed. Every summer we'd let the weeds grow until I couldn't stand it any more and then I'd spend an hour doing a job I hated more than anything. Weeding.

Over those same 15 years we talked about a few possibilities for the area. We basically came up with about three options.

1. Break out the surrounding concrete frame and just seed the area.
2. Build an expensive deck on the area. Having helped a friend build a deck, this was my last choice.
3. Put paver stones in.

None of these appealed to us and, like most homeowners, other projects beckoned, so we got real good at weeding and pretending the area would create itself.

Then we saw a friend's patio that was made from crushed and compacted "Spardust" a colored granite. We got some advice on how they did it and I even helped them re-compact it this spring to see how the process went.

So, with the graduation of our son looming, this project took priority this summer. I have been working hard on all phases of it for the better part of a month. This included building a flagstone wall, removing dirt and shifting the remaining around in an attempt to level it.

Then, I spread the first layer of Spardust and rented the compactor from, yes, Home Depot. Today, with the help of my graduating son whose graduation is the catalyst for the craziness, I compacted it, added a second layer and compacted it again. I returned the compactor to, wait for it....

Home Depot and purchased a "manual tamper" to help with the touching up of areas that need it.

In all, I think it came out pretty good, despite the resultant hernia and spinal compaction I endured moving rock and 200 lb compactors.

These past few summers, I've taken to sitting out back with my dog, Toby while I write and have my decompression beer of the evening. There are cardinals, swallows, squirrels and rabbits. It is a nice change from the noisy street out front. I've grown to love my back yard and I hope to spend even more time there now that this area is done.

And when it was all done, my wife and I looked at each other and said, "Why did we wait 15 years to do this?" We agreed that things like raising kids and other home projects got in the way of this and many of other projects. 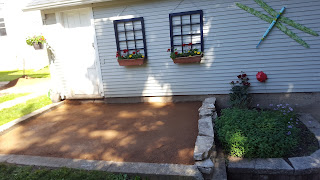 But mostly we agreed it was because we are yard fail people.