October 31, 2019
This past weekend was spent fishing for muskie with my friends Steve and John, a tradition that is ten years running now, as I mentioned last post. I'll be honest, I had a bad feeling going in. I figured since I got one last year, it was back to the drought.

It turns out I couldn't have been more wrong.

Within the first hour of the first day, we boated a 40" fish that my buddy hauled in. Then within an hour and a half of that one, I caught a 30" fish while casting. There is nothing quite like catching a muskie casting (as opposed to trolling), so I was elated to not be skunked. 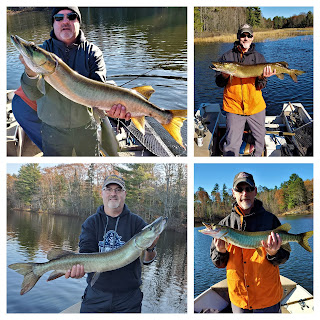 Then, while John was taking my fish off, the bobber started moving on one of the suckers in the water. It was what we call a "doubleheader" in the fishing world; two fish on at the same time. It's something that is almost unheard of in the muskie fishing world.

Because my fish was much tinier than the 40" fish caught earlier, they decided to let me catch the one on the bobber. After about 10 minutes I landed my second fish of the day, a 36"er. It put up a tremendous fight and I shook for 15 minutes. It was a moment that I won't soon forget.

The following day we hooked into another 37" and lost a couple more that spit the bait. None of us could believe our luck. 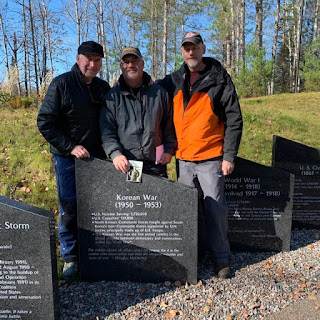 To add to an already fantastic weekend, John, his girlfriend Jen and I all surprised Steve with showing him where his father's name would be engraved at the Presque Isle Wilderness Veterans Memorial. It is a beautiful memorial right outside downtown that features granite markers for each war and an "eternal flame" that funds raised by donors keep burning.

The idea was John and Jens, and when they told me, I told them I was in for sure. I got a couple pictures of Steve's dad, Richard Krey and the dates he served etc. They sent it in and now his picture an service info is on the website.

Steve seemed pretty touched and it was a cool moment between three guys who have fished together for 10 years and become pretty good buddies. I credit both of them for making my muskie experiences way better than I ever dreamed. It hasn't always been easy, but they sure do make it fun. I'm lucky to have them as friends. They both love to help other people catch fish.

Now, I can't wait until next October.