October 13, 2019
Fall is always a melancholy time of year for me. I love the colors and the beauty of a nice fall day, yet it is a brutal reminder of what follows as well. I admit I am in full denial and was wearing short sleeves until yesterday, when the bottom dropped out of the weather and I was forced to go full sweatshirt.

At the same time, this time of October always holds great significance for me for a number of reasons. Today was my nephew (and godson) Nick's birthday. He and I were pretty close as he was young and have maintained a great bond ever since. He is currently serving our country in the Middle East, leaving his family back in Wisconsin while he finishes out his tour. 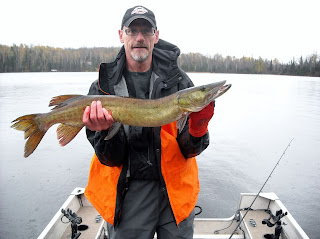 And of course I can't forget that tomorrow my brother Rob would have been 55. Not a day goes by where I don't think of him in one way or another. He always loved this time of year as well. He was a rabid Viking fan but also loved going to the apple orchard and picking pumpkins with his wife and daughters. He was a Halloween buff and got into decorating the house and/or going all out in his costuming.

Rob's presence is missed at family functions, but I still allege that his legacy was leaving all of us with a sense of living life with a grateful heart for each day as well as a compelling sense of urgency and purpose. "Live life to the fullest," was a saying he used with frequency, well before he was sick. They almost seem prophetic now.

Another reason this time of October is significant is it usually the time I go muskie fishing. The fall bite is on and in a couple of weeks I'll be going up to fish for them again. And of course the colliding of both of these worlds happened 8 years ago tomorrow when I caught a muskie on what would have been Rob's 48th birthday. It was a smallish fish, but it helpd great significance for me. My friends Steve and John helped make it all happen in the rain on that lake that day, and I will always remember the day and the time with my friend who helped me remember my brother. It was the inspiration behind the tattoo I got in 2013 in honor of him. He will be there with us in spirit again in a couple of weeks.

And finally, this is the time of year that the traditional Landwehr Hunt takes place in northern Minnesota. This is a tradition started by my dad and his brothers over 50 years ago. Now it is all the sons and grandsons that go to Gull Lake to catch up, play cards and have some adult beverages. Hunting has always been a "decoy" for what really goes on. Often times no one brings a gun. 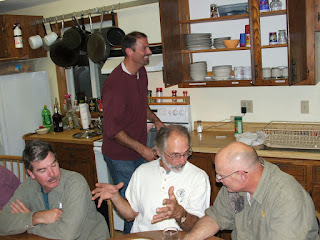 I've only been to one of these gatherings, and it was the only one all four of us brothers were all present for. At one point there were about six of us in a deer stand smoking cigars. It was like a sweat lodge except with smoke. Crazy stuff, but I laughed so hard my side hurt for two days. I am glad I made the trip. They'll be going up again this year, and again without me, as it falls too close to my fishing weekend, but I know it will be meaningful time together.

So, as much as I dread the oncoming winter, this month of October means a lot to me. Special people, special times and captivating memories. I am going to embrace the cool weather, the glorious colors and time with people I love.